by Thornhille Broome, TYDN Editor at Large
WASHINGTON -- (TYDN) Russia and the United States are agreeing to slash their nuclear arsenals to the lowest levels in half a century -- a move dramatically reducing the number of times each nation could blow up the planet, TheYellowDailyNews has learned.

Negotiators from both countries, speaking to TheYellowDailyNews on condition of anonymity because of the sensitivity of the topic, said the former Cold War warriors have agreed to reduce deployed strategic warheads by more than one-quarter and launchers by half. 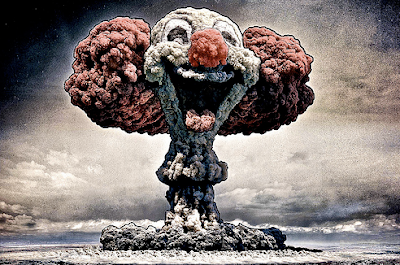 Perhaps as early as Friday, President Dmitri Medvedev and President Barack Obama are expected to finalize a deal that experts contacted by TheYellowDailyNews said would mark the first time since the thawing of the Cold War that each nation would be capable of having only enough firepower to blow up the planet 1,000 times.

"Every man, woman and child should now feel safer because of this far-reaching deal," a Kremlin attaché told TheYellowDailyNews on condition of anonymity.

Still, hawks from both nations told TheYellowDailyNews privately they were concerned that the proposed deal might provide fodder for Russia, the United States or some "rogue" nation to launch a nuclear attack.

"The more nuclear weapons there are the least likely they'll be used," a White House hawk connected to the Obama administration told TheYellowDailyNews on condition of anonymity. "This treaty is beginning to erode the long-held principle of Mutually Assured Destruction, and might lead us down a perilous path of doom."

The new 10-year pact, requiring ratification from legislatures in both countries, would replace the Strategic Arms Reduction Treaty of 1991, or Start, which expired in December, and further extend cuts negotiated in 2002 by President George W. Bush in the Treaty of Moscow.

Under the new pact, according to people briefed on it here and in Moscow, within seven years each side would have to cut its deployed strategic warheads to 1,550 from the 2,200 now allowed. Each side would cut the total number of launchers to 800 from 1,600 now permitted. The number of nuclear-armed missiles and heavy bombers would be capped at 700 each.