NEW YORK—(TYDN) That one Game of Thrones blonde woman with long, braided hair was involved in a nude scene in the latest episode, TheYellowDailyNews has learned.

The nude scene involving the character Daenerys, who is a slave-liberating queen of some place and who has a few fire-breathing dragons, was much anticipated and boosted HBO ratings enormously. 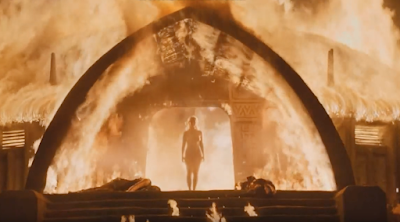 Analysts said it was Daenerys' best nude scene since her last nude scene in season 3, and it came at a pivotal moment in the 6-season-long series.

"Nobody really knows what this show is about anymore, except that there's a few characters that we really want to see naked, and up popped the devil in the latest episode," TV Guide movie critic Jake Jonstein said in an exclusive interview with TheYellowDailyNews. "This underscores how absolutely brilliant this show is."

Viewers were elated, too, as the actress was shown nude for several seconds after walking out of a burning hut, unscathed whatsoever.

"This show has got a bunch of pretty people backstabbing each other and trying to rule some place somewhere, and one of these places has a giant wall, and I've been awaiting for Daenerys to get naked for several seasons now," one viewer told TheYellowDailyNews on condition of anonymity. "Sure, that other witch-like woman gets naked all the time, but she's no Daenerys."

Other TV critics, however, blasted the show, saying it needed more nude scenes to remain relevant.