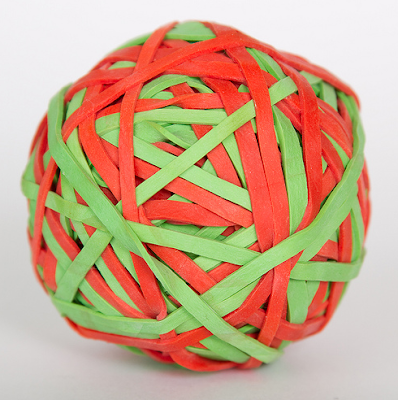 The rubber band ball, which officials declined for national security reasons to disclose how many rubber bands it was composed of, was lowered more than a mile under the Gulf offshore here and tightly lodged into the 21-inch-wide ruptured wellhead. The move capped the largest man-made environmental disaster in U.S. history, resulting in a slick of black goo covering some 2,500 miles of ocean and soiling beaches as far away as Florida.

The capping came a day after President Barack Obama declared the oil spill an illegal terror organization, ordering banks to freeze its assets while asserting the urgency to contain the enemy spill was akin to the search for Osama bin Laden.

Meantime, the giant, red-and-green ball was ready to seal the Deepwater Horizon disaster a month ago after a New York elementary school student responded to a Pop-Tart's "Plug the BP Leak" competition. The contest drew a host of other entries, including student suggestions to use giant gum balls, huge spit balls, little sisters, principals, dead cows and even BP Chief Executive Tony Hayward's yacht -- with him in the pilot's cabin.

With every plugging effort failing and no parents willing to sacrifice their daughters, scientists believed the rubber band ball, as a last-ditch effort, would do the trick. But the plan was tentatively idled as the Environmental Protection Agency spent weeks submitting the synthetic rubber ball to environmental testing.

Several EPA officials, speaking on condition of anonymity, told TheYellowDailyNews they were initially wary of the rubber band ball. Dubbed "The Giant Rubber Band Ball," these EPA officials feared the petroleum-byproduct-based ball might begin to leach petroleum byproducts into the Gulf of Mexico.

"That's the last thing we wanted on our hands, adding more contaminates into the Gulf," a well-placed EPA official, speaking on condition of anonymity because of the sensitivity of the issue, told TheYellowDailyNews. "We feared we could take a lot of heat for that, so we demanded that the rubber bands be environmentally safe."

Americans were ecstatic that "The Giant Rubber Band Ball" appeared to be holding, even a dozen hours after divers stuffed it into the spewing, broken wellhead.

Jose Marijuanovitch, a 22-year-old unemployed Corpus Christi fishmonger, said in an exclusive interview with TheYellowDailyNews that he now doesn't feel as guilty filling up his '79 Chevy that gets 16 miles per gallon.

"Before this spill, when I filled up I only thought I was contributing to the drug trade, gun trade, terrorism and oppression in some godforsaken oil-producing nations," he said as he filled up at a local BP station. "Then, after the spill, I also started feeling bad for all that sea life and coastline being destroyed right here in the U-S of A."