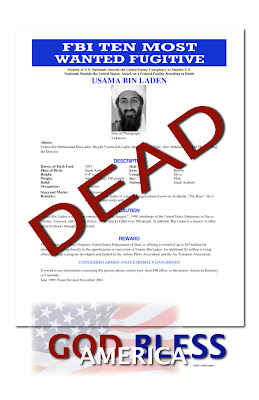 According to an exclusive TYDN telephone survey, with an error rating of plus-or-minus 3.5 percentage points, the president's polling numbers had dropped to their lowest level ever in the nation's first presidential survey following bin Laden's single assassination. Among other questions, the poll asked Americans whether they thought bin Laden's head should have been used in the next World Cup soccer match, or whether the terrorist should have been killed at least twice.

Bin Laden, whom the government believes was the mastermind behind the 2001 terror attacks on the United States, was killed by American forces in Pakistan in retaliation for the 3,000 dead Americans his 9/11 plot left behind. But the nationwide celebrations that erupted after the president's announcement late Sunday quickly turned to anger when Obama revealed the military had dumped bin Laden's body in the ocean instead of killing him a second time, according to the TYDN poll of 5,000 likely voters.

"Our survey showed that Americans are really angry at Obama for not killing him twice, and this may hurt his re-election bid," said TYDN pollster Heimrich Schmendrick, in an exclusive interview with TheYellowDailyNews. "Remember, potential presidential rival Donald Trump has said all along that he would have killed bin Laden three times if he were in charge."

The TYDN survey found that 68 percent of those polled were disappointed with the president's handling of the bin Laden assassination because bin Laden was not killed at least twice. Another 15 percent were undecided on whether he should have been killed twice.

Some dovish respondents said bin Laden's head should have been placed in a vice and slowly tightened in front of a worldwide television audience.

About 10 percent of those polled had never heard of bin Laden.