By Hideus Nucleau, TYDN Nuclear Affairs Writer
TOKYO -- (TYDN) Japanese authorities on Wednesday raised the severity rating of the nuclear crisis at the Fukushima Daiichi power plant to one notch higher than the highest level on an international scale -- a rating greater than the 1986 Chernobyl disaster, TheYellowDailyNews has learned. 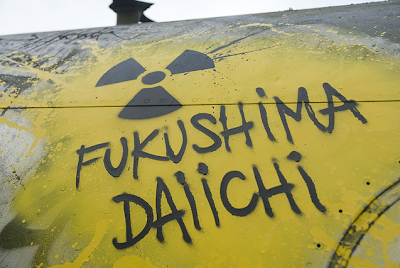 Officials from Japan's nuclear agency reclassified the ongoing emergency from Level 10, an "accident with off-site risk," to Level 11, "a major fucking accident."

Masataka Shimizu, president of Tokyo Electric Power Company, TEPCO, said in an exclusive interview with TheYellowDailyNews that cleanup crews were working around the clock.

"We should have the contamination contained in about 10,000 years," Shimizu said.

Atomic energy experts, in exclusive interviews with TheYellowDailyNews, suggested Shimizu was being overly optimistic. The 12-mile radius surrounding the plant won't be contaminate-free for more than 12,000 years, these experts said in the exclusive interviews.

Once the contamination subsides, urban planners are mulling building homes, shopping malls and office complexes on the site, TheYellowDailyNews has learned. Some planners privately have suggested an amusement park.

But that plan has been tabled because the Walt Disney Co. won't build parks atop exploded atomic energy plants, according to internal documents reviewed by TheYellowDailyNews.

Prime Minister Naoto Kan, however, is proposing rebuilding a new nuclear plant over the old one, a proposal Kan insiders said was meant to give a boost to Tokyo Electric shares, which rebounded in after-hours trading.

"If there's another accident, man-made or environmental -- if you can separate the two distinctions -- the surrounding populace won't suffer as much because it's already been nuked generations before," he said in a televised address to the nation.

The reassessed severity rating to 11 applies to only three of Fukushima's six units -- Nos. 1, 2 and 3, which have all sustained core damage. Each of those, on March 18, had been initially given a Level 5 rating. At the same time last month Japan gave a Level 3 rating to unit 4, which remains unchanged.

The IAEA cautioned that Japan could still change its ratings as more information becomes available. Hironobu Unesaki, a professor at the Kyoto University Research Reactor Institute, said those reactors' levels should have been elevated sooner. The government, he said, is being too cautious in a bid not to cause public panic.