NEW YORK —(TYDN) The committee that annually doles out the coveted Pulitzer Prizes added a new category—aggregation—to the list of topics underneath the coveted journalism award umbrella, TheYellowDailyNews has learned.

The Pulitzer Prize Board—consisting of editors, reporters, novelists, writers, artists, and professors—said late Wednesday the new category was necessary because much of the journalism being produced in the Digital Age is aggregated by machines and humans. 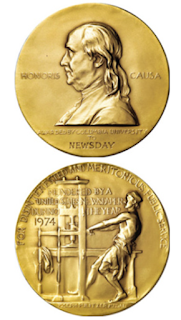 "The industry has become an aggregated mishmash of news slop, with everybody regurgitating the next guy, so much so that we would be out of step with the times had we not added this new category," Pulitzer Prize Board member Joanne Blaustein told TheYellowDailyNews in an exclusive interview.

The move, heralded by the media industry which for years had been pushing for the new category, comes days after a special report by TheYellowDailyNews found that the bulk of news stories the media published was first written by a 16-year-old Rhode Island high school junior who had an uncanny pulse on everything from politics, general news, entertainment, business and opinion.

"What would you rather see online, a bunch of long stories you can barely get through about some lame water crisis in Flint, Michigan, or hot bikini photos of the latest drug-addled celebrity hottie?" asked Johhnny Yellstein, a Pulitzer Prize Board member, in an exclusive interview with TheYellowDailyNews. "I mean, who cares about some starving people at war in some place you’ve never heard of or will ever go when there's hot movie chicks in bikinis to slobber over."

Pulitzer Board Member Alfonso Goolstein was the sole member of the 18-member committee to vote against the changeover. He resigned after suggesting, instead, that a Pulitzer Prize be doled out to excellence in reporting on world hunger.

Goolstein, eating caviar and drinking Dom Perignon champagne in his Manhattan penthouse, told TheYellowDailyNews in an exclusive interview he was shocked that he was forced to resign from the Pulitzer Prize Board. "I was just trying to stick up for the hungry and oppressed," he said as he ordered his butler to bring another round of drinks.

Meanwhile, a Pulitzer Prize Board spokeswoman, speaking to TheYellowDailyNews on condition of anonymity and granted anonymity, said the committee has received 9,789,452 nominations for the new Pulitzer Prize in aggregation reporting.