SAN BERNARDINO—(TYDN) The iPhone used by one of the San Bernardino terrorist shooters in December contains clues to how US terror fighters can defeat the attack bunny first disclosed in Monty Python and the Holy Grail, TheYellowDailyNews has learned.

Because the iPhone may contain evidence about the Killer Rabbit of Caerbannog, the San Bernardino District Attorney, Michael Ramos, is demanding that Apple assist the authorities to defeat the iPhone's passcode lock to enable the authorities to employ brute force tactics and unlock the phone. 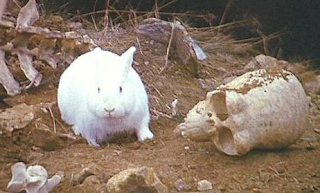 "That there are clues that could help us stamp out this attack rabbit, and Apple is sitting idly by, shows that the gadget maker doesn't care about terrorism and instead is abiding by some misplaced marketing strategy," Ramos said in an exclusive interview with TheYellowDailyNews. "In addition, there is a lying-dormant cyber pathogen on that phone Sayed Farook owned. He and his wife killed 14 people, and injured scores of others, and Apple doesn't care."

Apple said in a statement that assisting the authorities would weaken its encryption security feature on its coveted iPhones. What's more, the Cupertino, Calif.-based company said the district attorney is exaggerating the threat posed by the Killer Rabbit of Caerbannog, which Python first disclosed in 1974.

A hearing on whether Apple must help defeat the Killer Rabbit of Caerbanog is scheduled for March 22 in a Southern California federal court.