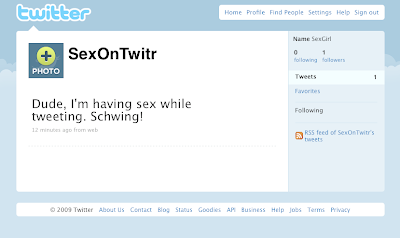 The Pulitzer Prize Board said The Times' coverage exemplified "the Holy Grail of quality journalism, and Twitter coverage in particular." The committee added that the paper's 80-member Twitter reporting team "faced stiff competition from dozens of media outlets, both online and print, that had been scouring Twitter in what best can be described as one of the greatest public-service endeavors since Woodward and Bernstein."

Honorable mentions included Wired's report of the first person defecating while on Twitter. The Associated Press was mentioned as another runner up for its recent coverage of Iranian dissidents using the 140-character Twitter service to plot protests amid a government crackdown.

Media historians said it was the first time in Pulitzer history that the prize went to a 10,000-word article – Sex Acts Meet Twitter -- that had meaning and engaged the general public.

"Usually, the prizes are given to reporters who uncover graft, corruption, pollution and government waste," Tim Histo, a Harvard University historian, said in an exclusive interview with TheYellowDailyNews. "Many people find such topics boring. This Twitter story was the convergence of a perfect storm of sorts: Twitter and sex."

The New York Times, in an exclusive statement to TheYellowDailyNews, said its investigative reporters recently received an anonymous tip that somebody had registered the username SexOnTwitr. Reporters scrambled to that Twitter page and found this garbled message: "Dude, I'm having sex while tweeting. Schwing!"