By Chester Molenestar, TYDN Family Affairs Writer
BIRMINGHAM, Ala. -- (TYDN) Federal authorities are investigating a spate of lynching and cross burning nationwide: The frightening scenes, once of the civil rights era, are being perpetuated by a growing coalition of "concerned and wholesome parents" worried about children and family values, TheYellowDailyNews has learned. 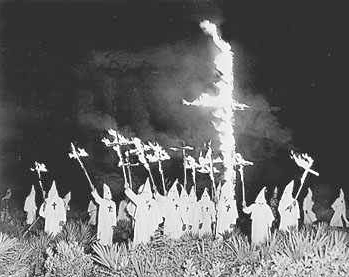 At least eight Federal Bureau of Investigation sources, speaking on condition of anonymity, told TheYellowDailyNews early Tuesday that the animosity stems from these parents' disdain that their parental counterparts allow their children to walk to school or play outside without adult supervision – sometimes for minutes at a time, the FBI sources said. These sources said race was not the motive.

The federal officials expressed alarm over the Ku Klux Klan-style methods of terror, including the kidnapping and torture of some elementary school-aged kids "to teach these parents how wrong it is to let their children out of their eyesight," an FBI source told TheYellowDailyNews.

At least one U.S. historian, in an exclusive interview with TheYellowDailyNews, acknowledged it was the first time in American history that neighborhood strife was born absent prejudices in color, religion and social-economic status.

"This is the first time in American history that neighborhood strife was born absent prejudices in color, religion and social-economic status," said Harry Jeffers, a Cal State Fullerton historian  and former Nixon administration official, in an exclusive interview with TheYellowDailyNews. "We've never seen anything like this. Usually, everybody just surfs the Internet or watches TV in their free time."

The authorities said the marauding group of parents calls itself, "The Wholesome Family Against Children Walking and Playing Absent Adult Supervision," or TWFACWAPAAS for short.

"Apparently, the atrocities plaguing American neighborhoods are the alarming work of a growing group of concerned and wholesome parents called TWFACWAPAAS worried about the children and family values," an FBI source, requesting anonymity because of the sensitivity of the topic, told TheYellowDailyNews after being granted anonymity by TheYellowDailyNews.

"In many instances," the source added, "TWFACWAPAAS members would kidnap children on their way to school, while waiting at the bus stop or playing in the park, just to teach their loser parents of the dangers of allowing their children out of their eyesight. The unspeakable perpetrated by the TWFACWAPAAS goes without saying, and many local police departments would look the other way."

TheYellowDailyNews could neither immediately nor independently verify the FBI's claims.