Every Member of Congress Being Indicted

by Thornhille Broome, TYDN Editor at Large
CHICAGO -- (TYDN) Prosecutors here are readying a federal indictment against all members of Congress on allegations of "honest services fraud," the same law being invoked to prosecute high-profile defendants including former Illinois Gov. Rod Blagojevich for allegedly trying to sell the Senate seat Barack Obama was vacating after winning the presidency, TheYellowDailyNews has learned.

At least six sources with direct knowledge of the probe, speaking on condition of anonymity, told TheYellowDailyNews early Thursday that the Chicago indictments and arrests could come down perhaps as early as Monday. Legal experts said it was the first time in U.S history that prosecutors have moved to indict all of Congress. 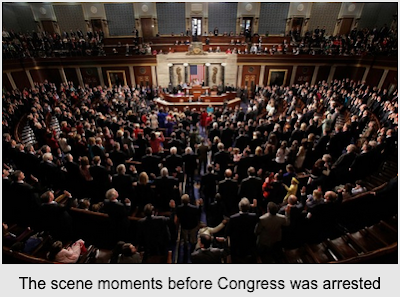 The federal sources said Patrick J. Fitzgerald, the U.S. attorney for northern Illinois, has convened a federal grand jury here in a bid to indict the 100 Senate members and the 435 House representatives "for committing honest services fraud against the people of the United States of America."

Defense attorneys decried the allegations, saying the law in question was so vague it could lead to the indictment of a ham sandwich. The 28-word statute includes language making it illegal to perform "a scheme or artifice to deprive another of the intangible right of honest services."

The anticipated indictments come as the U.S. Supreme Court is weighing the constitutionality of the 21-year-old statute that recently ensnared the likes of media mogul Conrad Black, Enron CEO Jeffrey Skilling and lobbyist Jack Abramoff. In February, Justice Antonin Scalia wrote that the corruption law (.pdf) was so poorly crafted that it could cover "a mayor for using the prestige of his office to get a table at a restaurant without a reservation."

Local and state lawmakers, meanwhile, started worrying that they, too, would fall under Fitzgerald's sword.

Details of the charges being levied against Congress were not immediately available. But sources suggested the allegations relate to lawmakers having already generated a combined $219.5 million campaign war chest a year before the 2010 elections.

That means each legislator has, on average, received $410,280 from special interests for a job paying annual wages of $165,200 – and not all lawmakers are up for renewal.

"If this doesn't fit the definition of honest services fraud, then I don't know what does," a federal prosecutor familiar with the pending indictments told TheYellowDailyNews on condition of anonymity and was granted anonymity by TheYellowDailyNews because of the sensitivity of the topic.

"This just doesn't pass the smell test," the source continued, "and doesn't even begin to scratch the surface."