Sources close to what insiders described as "the longest-running investigation in U.S. history" – second in length to the hunt for Osama bin Laden -- said chief executives at the New York Stock Exchange and the NASDAQ Stock Exchange were being rounded up and arrested in connection with a record-setting financial fraud totaling trillions of dollars. Thousands of brokers, bankers and others assisting in the massive scam were also being arrested nationwide. 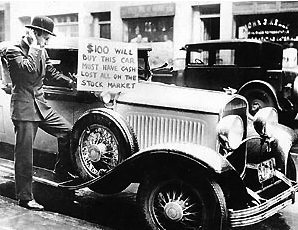 Stunned onlookers watched along Wall Street here as regulators tossed Wall Street Journal executives into the paddy wagon, accusing them of creating a leading stock-tracking index -- the Dow Jones Industrials -- enticing tens of thousands of victims along the way. Hundreds of suit-and-tied executives were seen jumping from their penthouse windows or corner offices.

"The whole financial system appears to be founded on a classic Ponzi scheme, just like the Social Security retirement system," a well-placed Securities and Exchange Commission official told TheYellowDailyNews on condition of anonymity. "New investors were enticed to get in because they saw the early adopters making money. Eventually, the system implodes on itself, a phenomena we just learned about that has secretly been called a 'correction' or a 'crash.'"

Historians said it was the first time in U.S. history regulators have raided and shuttered leading equities exchanges since the New York Stock Exchange was founded in 1817.

Meanwhile, defense attorneys decried the allegations, saying the markets were not a Ponzi scheme but instead symbolized "the fabric of the American Way."

"This just shocks the conscience that the government would declare the fabric of the American Way a scam," defense attorney Cash Shyzsteeshia said in an exclusive interview with TheYellowDailyNews. "What are they going to target next: lawyers and pay-to-play lobbying?"

Entrepreneurs seized on the shakeout, immediately hawking specially crafted mattresses advertised as "replete with hidden storage compartments to securely store your life savings." Warranties lasted up to five years, but were null and void for smokers.

The authorities discovered the latest Ponzi scheme about a month ago as they were readying indictments stemming from the Great Depression "crash" eight decades ago in which equities lost about 90 percent of their value, sources familiar with the probe told TheYellowDailyNews on condition of anonymity.

The term Ponzi stems from Charles Ponzi, an Italian immigrant who stole about $1 million from U.S. investors in a 1920 postage stamp scam resembling the now-defunct U.S. equities market.