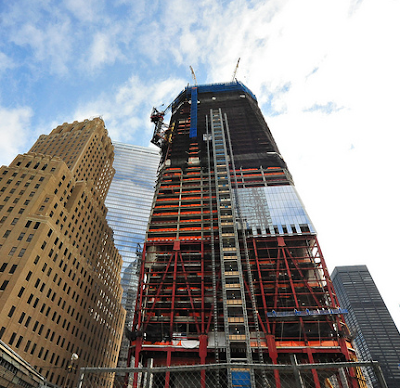 The World Trade Center here in Lower Manhattan was attacked and destroyed by al-Qaida operatives who hijacked airplanes and crashed them into its towers on Sept. 11, 2001, killing thousands. Following the devastation, the United States invaded Iraq and Afghanistan, stripped U.S. citizens of many civil liberties and declared a global war on terrorism.

In response to the Port Authority's announcement that it had forgotten to build bathrooms and install plumbing for the 90-story structure, President Barack Obama said Wednesday the delay only underscores America's resolve against terrorism.

"That it will only take 25 years to erect a building shows that America can never be defeated, and that no matter what happens, America will rebuild expeditiously," Obama said in an exclusive interview with TheYellowDailyNews.


The cost of the new World Trade Center's "Freedom Tower" has soared to $3.8 billion, $700 million more than the last publicly released estimate in 2008. The bill is expected to climb even more after the latest bungle was discovered by an engineer who had to defecate on the job, according to an analysis by TheYellowDailyNews, the most exhaustive analysis on the topic.

"Several years ago there was a design miss," Patrick Foye, executive director of the Port Authority, told TheYellowDailyNews in an exclusive interview. "Should it have been caught? The answer is, probably."

Meanwhile, the construction mishap had no visible impact on wagering in Las Vegas casinos. Bets on whether the United States' war on terror would end before the World Trade Center's completion continued unabated, with most casinos still offering even-money odds.
Photo: asterix611/Flickr