by Jonathan Montoblan, TYDN Financial Affairs Writer
NEW YORK -- (TYDN) The Securities and Exchange Commission announced Wednesday it was vindicated from "any and all" scrutiny after it was revealed accused swindler Bernard Madoff had never made a single stock trade the past 13 years, TheYellowDailyNews has learned.

When Madoff was arrested in December, defrauded investors took out their anger at the SEC, wondering aloud how the stock market watchdog agency could have let the $50 billion swindle happen even after it received tips from whistle blowers about Madoff's fraud years ago. But on Wednesday, the agency declared victory and said it never took action against Madoff because he never made any stock trades. 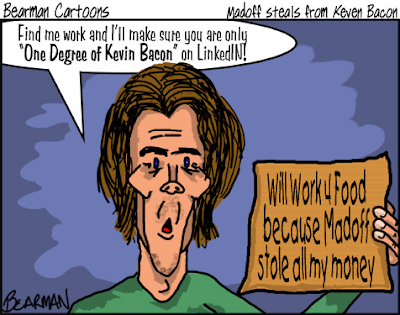 "This goes to show that the SEC was doing its job and only investigating real stock fraud, not made up stock fraud," said Christopher Cox, the SEC chairman who stepped down after President Barack Obama assumed the presidency. "Alleged stock fraud does not come under our purview. Had he made actual trades, we would have been all over that. Any and all scrutiny of the SEC under my tenure must be set aside."

Revisionist economics historians said it was the first time in U.S. history the SEC was falsely accused of looking the other way as thousands of investors were defrauded.

All the while, federal lawmakers began arguing that the Obama administration is over-regulating the economy even as the government injects trillions of dollars into the economy to ensure executives enrich themselves at the expense of taxpayers and their failures.

In the Madoff affair, meanwhile, the SEC announced its vindication five days after Irving Picard, the court-appointed trustee supervising Madoff's assets, told investors that there was no trace of Madoff ever making any stock trades despite his thousands of customers having received receipts purporting to document his trades on their behalf.

"We have no evidence to indicate securities were purchased for customer accounts," Picard told Madoff investors Friday. "This is a case where weâ..re going to be looking at cash in and cash out."

The SEC announced Wednesday that defrauded investors must first apologize to the SEC before receiving a bailout of as much as $500,000 each.

Madoff, the former NASDAQ chairman, is accused of bilking investors out of $50 billion. Pending a 2012 trial date, Madoff is being confined under house arrest at his Manhattan penthouse because the jails are too filled with drug offenders and shoplifters considered a danger to society.

His attorneys said they intend to seek dismissal of the charges based on the fact that no stock fraud was committed.