by Julie Pretzel, TYDN Media Affairs Critic
NEW YORK -- (TYDN) TheYellowDailyNews was awarded the Pulitzer Prize on Tuesday in a new journalism category focusing on newsrooms with "ambitious story ideas" even though those plans never make it to print, TheYellowDailyNews has learned. 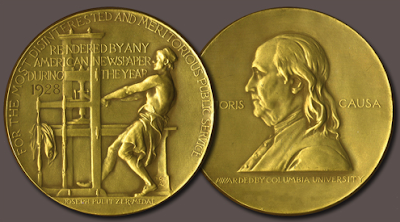 The New York-based Pulitzer board, taking its direction from the Oslo-based Nobel Peace Price committee that awarded President Barack Obama the top peace prize on Friday, said in a statement obtained by TheYellowDailyNews that TheYellowDailyNews' drive to "uncover graft in every corner of government in every city, county, state and federal building across the United States was a goal of laudable, and monstrous proportions."

The Pulitzer board said that, even though TheYellowDailyNews never embarked on those goals, having those goals nevertheless equated to deserving journalism's top prize.

"Wanting to expose government graft is the Holy Grail of journalism, regardless of whether you expose graft," Richard A. Oppel, the board's chairman, said in an exclusive interview with TheYellowDailyNews. "These are, by definition, ambitious story ideas."

Finishing a close second were several news outlets, including The Los Angeles Times, which earned an honorable mention for its ambition to be the first to report that Michael Jackson was still dead, weeks after his June 25th death.

The Nobel committee granted him the Nobel in light of his calls for peace and cooperation, to reduce the world stock of nuclear arms, to ease U.S. conflicts with Muslim nations, to strengthen the U.S. role in combating climate change, to knock down the Berlin Wall again, and to invite women to his White House pickup basketball games.

"We simply disagree that he has done nothing," Nobel committee chairman Thorbjoern Jagland said in an exclusive interview with TheYellowDailyNews. "On the same day we awarded him this prize of peace, for example, his administration was mulling sending 40,000 more 'peacekeepers' to Afghanistan."

"Although we know we have our critics, we were going to pursue the story once we got done researching the addresses of every city, county, state and federal building in America," Broome said. "Our researchers are combing through a football-field size pile of phone books right now to get those locations."