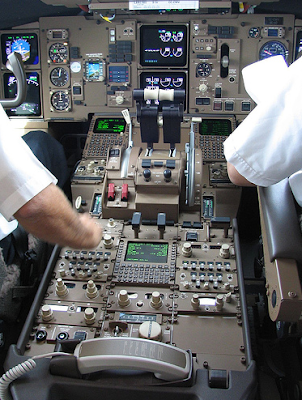 Pilot unions asserted there is reputable research supporting the theory that so-called controlled napping during flights can enhance safety by making crews more alert during descents and landings.

The proposed sleeping plan would allow one of a flight's two pilots to doze off in the cockpit for about an hour. The plan requires them to wake up before that allotted hour to avert a mid-air collision or free fall.

What's more, some pilot unions are also requesting conjugal visitation rights in the cockpit, and pilots have promised to perform cockpit sex as safely as they would fly the plane.

"It's not called the cockpit for nothing," said Dred Scottarski, a spokesman for the Southwest Airlines Pilots' Association, in an exclusive interview with TheYellowDailyNews.

Scottarski said the pilots' demands amounted to fairness. "Millions of bored Americans are asleep at their jobs everyday and it's now time pilots catch up to their peers," Scottarski said. "Hell, planes pretty much fly themselves nowadays."

Aviation historians said it was the first time since February, 2008 pilots have walked off the job to protest the FAA's anti-sleeping policy. That is when both pilots of a regional jet flying to Hilo, Hawaii from Honolulu fell asleep at 21,000 feet for about 20 minutes as air-traffic controllers on the ground frantically tried to awaken them.

What's more, United Airlines Pilots' Association is fighting the reprimand of pilot Hiemrich Smendricks, who was suspended two weeks without pay for co-mingling work and union activity, TheYellowDailyNews has learned.

The union is challenging UAL's decision to bill Smendricks $100,000 to pay for hundreds of barf bags and to re-upholster dozens of passenger seats after he handed out fliers to Los Angeles-to-New York-bound travelers urging them to support the "Pilot's Sleeping Bill of Rights."

An FAA spokesman, meanwhile, said the agency is reviewing the pilot unions' petition for napping and conjugal visitation rights. "The administration's commissioners are going to sleep on the request for a day or two," said Avery Plano, an FAA spokeswoman, in an exclusive interview with TheYellowDailyNews.

Avery said bowing to the pilots' demands would likely require the FAA to extend the same benefits to truckers, railroad engineers and subway operators.