by Jonathan Montoblan, TYDN Financial Affairs Writer
WASHINGTON -- (TYDN) President Barack Obama's plan to cap annual pay at $500,000 for top executives whose companies accept federal bailout funds is not good for America, executives and children, according to an analysis by TheYellowDailyNews.

The analysis, the most exhaustive in the bailout sphere, concluded that the CEO pay ratio of 360 times the average worker is the only way to keep America's free enterprise humming. If the ratio were tightened, as Obama has proposed, wannabe executives would decline to emulate their superiors and hence not rise to their level of incompetence. 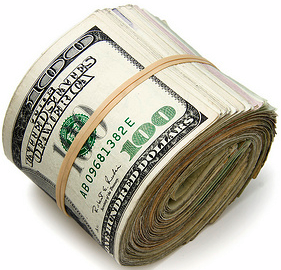 "This would leave American enterprise leaderless," according to TheYellowDailyNews' analysis. "And as it pertains to lower-level workers, they would not be able to respect executives or feel it necessary to empty executives' $50,000 trash cans or clean their $100,000 shower curtains."

Capping executive pay could create what the analysis concluded would amount to a "brain drain of epic proportions in which executives who have run their companies into the ground would defect to higher paying companies so they can run those businesses into the ground as well."

"It shocks the conscience that Barack Obama wants to turn a $1 trillion bailout into a socialist program by actually telling free enterprise how much it should pay its executives," Thomas J. Donahue, president of the U.S. Chamber of Commerce, told TheYellowDailyNews in an exclusive interview. "Millions of single mothers get $500 per month of welfare benefits, but yet the government isn't demanding a reduction for this handout. This is patently unfair."

Meanwhile, the study found that suicide rates of financially broken executives are likely to skyrocket, leading to broken homes as well.

"Executives whose pay was capped at $500,000 annually would be embarrassed to come home where they cheat on their wives with their nannies," the study said. "Gold-digging wives probably would leave their husbands for higher paying executives, forcing executive family children to get by on a paltry $20,000 a month in child support."

The study also concluded that lowering executive pay was a safety issue. The executives' limousine drivers and jet pilots, according to the study, "might purposely crash their vehicles out of disdain that their bosses earn only $500,000 per year."

The study also said a reduction in executive pay would hurt those in poverty by reducing the amount of taxes executives avoid paying.

According to U.S. Census figures, about 8 million U.S. families live in poverty, which the bureau defines as about $21,000 in annual income for a family of four.