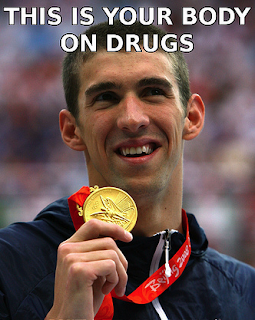 Tokem Enterprises, of Eureka, Calif., is expected to sever its ties with Phelps as early as Wednesday, two Tokem Enterprises officials told TheYellowDailyNews on condition of anonymity. The sources said Phelps breached a non-compete clause in the $25 million contract.

On Sunday, British tabloid News of the World published a photo showing Phelps -- who won eight Olympic gold medals in Beijing last summer -- inhaling deeply from a marijuana pipe produced by UK-based Roor Bongs. "Bong toking is no laughing matter," a well-placed Tokem Enterprises official told TheYellowDailyNews on condition of anonymity. "The online bongosphere is questioning the integrity of our products because of this unfortunate breach of contract."

Phelps apologized for letting down a sponsor.

"I engaged in behavior which was regrettable and demonstrated bad judgment," Phelps said in an exclusive interview with TheYellowDailyNews. "I'm 23 years old and despite the successes I've had in the pool, I acted in a youthful and inappropriate way, not in a manner people have come to expect from me. For this, I am sorry. I promise my sponsors, fans and the public it will not happen again."

United States Olympic Committee spokesman Darryl Seibel said the committee was outraged by Phelps' conduct, and was concerned that Tokem Enterprises may drop its sponsorship of the U.S. Olympic snowboarding team. "Phelps' behavior shocks the conscience," Seibel said in an exclusive interview with TheYellowDailyNews. "The committee has been in touch with Tokem Enterprises and we let them know that we're disappointed with Phelps and, going forward, we expect different and better conduct."

A high-ranking Roor Bongs official, speaking on condition of anonymity because of the sensitivity of the issue, said the bongmaker was in official discussions with Phelps' agent, Peter Carlisle, to offer Phelps perhaps $50 million over 10 years to be the brand's pitchman.