by Charles Lingualia, TYDN Staff Writer
NEW YORK -- (TYDN) Merriam-Webster linguists are tweaking the definition of the popular term -- Google It -- in a bid to keep up with a growing population too stupid to think for itself or too lazy to engage coworkers, friends and family members, TheYellowDailyNews has learned.

The phrase Google It originally entered the 11th edition of the Merriam-Webster Collegiate Dictionary in 2006 to define using the Google online search engine "to obtain information." Several Merriam-Webster sources, speaking to TheYellowDailyNews on condition of anonymity, said the dictionary publisher is expected to expand on that term in its newest addition set for release next month. 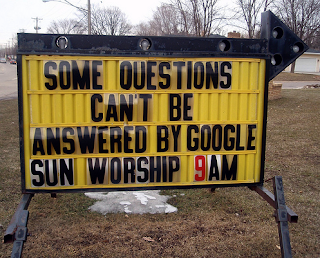 According to the text of the phrase's forthcoming second definition, which was obtained by TheYellowDailyNews, linguists have settled upon: "Screw you lazy bastard leave me alone I don't have time for you."

Language critics immediately blasted the timing of the changeover, saying the Google It second definition should have been updated at least a year ago.

"Everybody knows that that is what the term Google It means, and yet it took Merriam-Webster this long to actually put it in the dictionary," said Harvard University linguist John Salisbury. "This shocks the conscience."

Merriam-Webster spokeswoman Joannes de Garlandia said internal company discord was, in part, cause for the delay. "There was a big disagreement on whether the new definition should finish with the word jackass or dickwad," de Garlandia said in an exclusive interview with TheYellowDailyNews. "After months of discussion, we decided the definition we came up with was more than adequate "