by Charles Duffymeister, TYDN Staff Writer
SAN FRANCISCO -- (TYDN) Barry Bonds' penis and testicle size is likely to have a deep impact on whether the homerun king is convicted at his upcoming trial on accusations he lied to a 2003 federal grand jury when he testified he never knowingly used steroids, TheYellowDailyNews has learned. 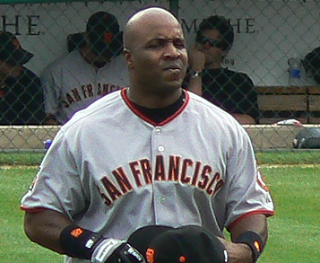 Federal prosecutors here are expected to call Kimberly Bell, the San Francisco Giants slugger's former girlfriend, who is to testify that Bonds' ballsack and penis shrank "noticeably" when he began using what authorities allege was steroids sometime around the year 2002.

Medical experts are expected to testify in the long-running investigation that shrinkage and reduced staying power are common side effects of steroid use in athletes, TheYellowDailyNews has learned.

"He used to f#%k on me pretty hard and his balls would slap me," Bell said in an exclusive interview with TheYellowDailyNews. "But when he started injecting steroids, there was noticeably some major shrinkage and flacidness, and his balls stopped slapping me. Obviously, I grew disappointed and we eventually split up."

Legal experts said it was not the first time a penis would be used against its owner.

In her exclusive interview with TheYellowDailyNews, Bell said she would testify that the Major League Baseball homerun leader's penis shrank in firmness from the size of a cucumber to "a jarred grocery store pickle." His testicles, she said, "once resembled hard-boiled eggs and shriveled to Hershey Kiss sizes."

People familiar with Bonds' ballsack and penis said Bond's defense team is expected to grill Bell when she takes the stand at next month's trial here.

"As you know, a man's penis and balls might seem bigger when they're not encased by a ton of pubic hair," defense attorney John Keker told TheYellowDailyNews in an exclusive interview. "The evidence is uncontroverted that Barry has a ton of pubic hair. Everybody knows that."

Bonds, 44, is charged with 10 counts of lying to a federal grand jury here investigating the BACLO steroid ring. He testified he was never injected with steroids and said he thought he was ingesting flaxseed oil.