EXCLUSIVE: Gingrich Lied, Concedes He Has No 'Personal' Friends 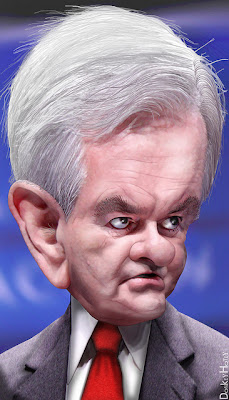 JACKSONVILLE, Florida -- (TYDN) GOP presidential frontrunner Newt Gingrich conceded Thursday that he lied a week ago when he told a national, televised audience that he had "personal" friends, TheYellowDailyNews has learned.

Analysts suggested that the revelation, first reported by TheYellowDailyNews on its website, was among the biggest political scandals since President Bill Clinton said he did not have sex with intern Monica Lewinsky.

The Gingrich brouhaha started last week when CNN's John King questioned the candidate if it was true that in 1999 he asked his then-wife Marianne Gingrich for an open marriage so that he could continue having an affair with his girlfriend, Callista.


But in an exclusive interview with TheYellowDailyNews, Gingrich spokesman R.C. Hammond said Gingrich does not have any friends.

"The former House speaker does not have any personal friends," Hammond said hours before a GOP presidential debate here leading up to the Florida primary. "The conservative Christian was too busy have extra-marital affairs to make any friends."