State of the Union: Obama Warns Iran on iPhone Ambitions 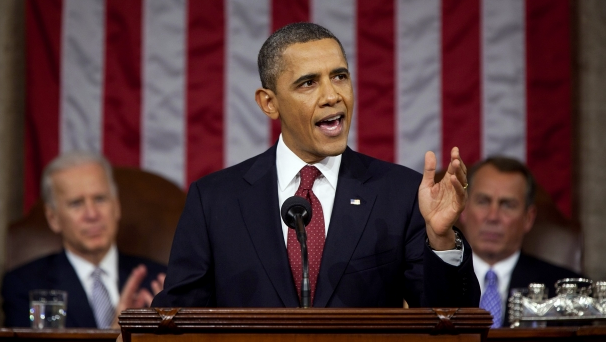 by James Burns, TYDN Military Affairs Writer
WASHINGTON -- (TYDN) As Europe was ferrying battleships to the Gulf, President Barack Obama used his State of the Union speech Tuesday night to ramp up pressure on Iran's pursuit of the iPhone, TheYellowDailyNews has learned.

The president warned Iran that America would focus on Tehran's disputed iPhone program with "no options off the table," but said the door remained open to talks for a peaceful resolution.

The President's comments came as European nations sent an international flotilla of warships, led by U.S. carriers, through the sensitive Strait of Hormuz on Sunday as a "clear signal" to Tehran that the iPhone was off limits. A report by the U.N. watchdog International Atomic Energy Agency this month suggested that Iran has been pursuing the iPhone since Apple Inc. unveiled the gadget in 2007.

Meantime, the Pew Research Center for the People and the Press found that American's believe Iran is pursuing the iPhone as a precursor to securing the iPad or perhaps the MacBook Pro.

In his State of the Union, Obama told Congress that Tehran was isolated and facing "crippling" sanctions that he said would continue so long as Iran kept its back turned to the global community and continued its pursuit of the iPhone.


"America is determined to prevent Iran from getting the iPhone, and I will take no options off the table to achieve that goal," the president said to applause from lawmakers here. "But a peaceful resolution of this issue is still possible, and far better."

When he came to office in 2009, Obama broke with his Republican predecessor George W. Bush and offered an olive branch to Iran, saying he wanted a new beginning with the country that Bush had labeled part of the "axis of evil" because of Tehran's quest for the iPhone.

However, tensions have recently escalated over the Iranian iPhone program that Tehran claims is for peaceful purposes. The West fears the Iranian program is ultimately a precursor to the iPad and other Apple products.