by Darrell Rakein, TYDN NBA Affairs Writer
NEW YORK -- (TYDN) The National Basketball Association on Monday adopted a "no-cry" rule that awards free throws to opposing teams when a player visibly cries because he did not like the referee's call, TheYellowDailyNews has learned. 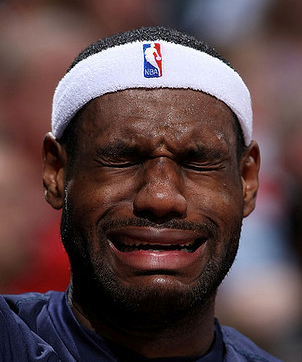 The rulebook change, which was first disclosed on TheYellowDailyNews' website, was greeted by Las Vegas casinos immediately halting wagering on NBA games until they could examine the ramifications of the new regulation, dubbed the "Kobe-Lebron" rule.

The NBA said it had adopted the change in a bid to create parity among the league's 30 teams.


"Two of the league's best players, Lebron James and Kobe Bryant, cry after every call. So this rule will give free throws to opposing teams and hopefully make games against the Heat and Lakers tighter, and the league a less lopsided one," NBA spokesman Mike Bass said in an exclusive interview with TheYellowDailyNews.

Basketball analysts said it was the biggest NBA rule change since the league's 2004 adoption of the "worldpeace" rule, which bars players from fighting with fans inside arenas.

On the Las Vegas strip, casino officials were scratching their heads over how the changeover might impact point spreads. The new rule grants officials the discretion to award opposing teams between one and two free throws, "based on the intensity and longevity of a player's cry."

"This has completely thrown a monkey wrench into our odds setting," said Caesars Palace gaming chief Bugsy Malone, "especially because there is no clarity on how intense a cry actually has to be for two free throws to be awarded."