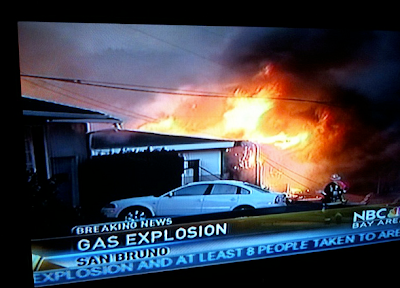 About 50 homes were also destroyed and dozens of people injured when what was originally believed to be a Pacific Gas and Electric natural gas line rupturing. As it turned out, a flatulence ignition sent a massive fireball through a neighborhood here, engulfing everything in its path.

The revelation was first reported early Friday on TheYellowDailyNews' website.

PG&E is breathing a huge sigh of relief after the authorities concluded that a handful of 7th grade local boys in the neighborhood were using a Bic lighter and igniting their flatulence, seeing who could produce the biggest conflagration from their buttocks, TheYellowDailyNews has learned.

"One of the fattest boys really laid one out, and all hell broke loose," said National Traffic Safety Board investigator, Hans Methanamus, in an exclusive interview with TheYellowDailyNews. "Sooner or later, we knew a flatulence contest gone awry would result in a disaster of biblical proportions."

In the tragedy's wake, Congress immediately passed legislation, signed by President Barack Obama, making it a felony, even for juveniles, "to ignite their farts with matches or lighters." The "Don't Light Your Flatulence Act" carries penalties of up to five years in prison.

The American Civil Liberties Union immediately decried the legislation as being vague, saying in a statement obtained by TheYellowDailyNews that some youths could be prosecuted under the law "because they emitted a heavy dose of flatulence near where their parents were barbecuing."

According to investigatory reports reviewed by TheYellowDailyNews, a group of as many as six middle school boys, who had just returned from Taco Bell, challenged one another to determine "who could be the block's 'flatulence king' for the day."

Witnesses described the aftermath of the flatulence contest as a thunderous roar heard for miles, sending a geyser of fire hundreds of feet into the air as emergency personnel responding to the scene believed that an airline crash had occurred.

The flatulence-stoked blaze leaped from structure to structure in this neighborhood a few miles south of San Francisco, unabated for almost an hour as emergency crews rushed in and residents streamed out.