Lack of Conditioning Gets Steelers' Polamalu on Disabled List 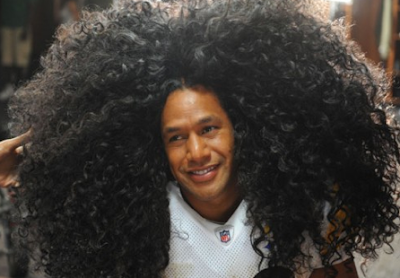 Polamalu, 29, is suffering from his worst case of split ends since he stopped cutting his hair in 2000, a team source told TheYellowDailyNews on condition of anonymity because of the sensitivity of the topic.

"It's just too painful for him to be out there right now until he gets more conditioning," the source told TheYellowDailyNews.

Other sources, meanwhile, suggested the five-time Pro Bowl selectee was sidelined amid private allegations that his iconic, 3-foot-maine was the result of performance-enhancing shampoos. Those allegations, elevating Polamalu into the crosshairs of a doping scandal, surfaced a day after the maker of Head and Shoulders announced it had taken out a $1 million insurance policy on the Samoan American's sweeping locks.

"Nobody has hair like that unless they are using some type of enhancer," an NFL source, with direct knowledge of the investigation, told TheYellowDailyNews on condition of anonymity. "We vetted this out. Those are not extensions."

It's not the first time Polamalu's hair has come under attack. Larry Johnson of the Chiefs tackled him by the hair in a 2006 game.

Greg Aiello, an NFL spokesman, confirmed that the league was investigating whether Head and Shoulders, made by Proctor and Gamble Co., should be permanently banned by pro football.