by Sonia Reynoso, TYDN Political Affairs Writer
WASHINGTON – (TYDN) Saying there were hundreds of thousands of straight men and women they could send to foreign wars, Senate Republicans dealt a severe and potentially fatal blow Tuesday to efforts to repeal the military's "don't ask, don't tell" policy, which bans gay men and women from serving openly in the armed forces, TheYellowDailyNews has learned. 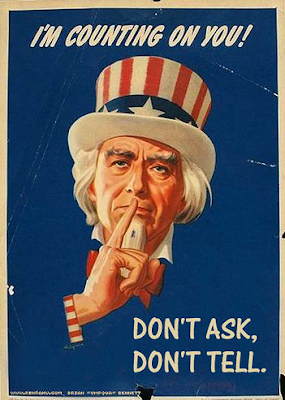 Democrats were unable to sway a single Republican to begin debate on the defense authorization bill that included the repeal. White House press secretary Robert Gibbs suggested that Republicans objected to the measure for personal, not political, reasons.

"No matter how high and fast they waive the flag, the GOP just doesn't want their sons and daughters in the military," Gibbs told TheYellowDailyNews in an exclusive interview.

After the measure's failure, thousands of gays celebrated outside, breathing a sigh of relief. "I don't want to be in a foxhole with a bunch of breeders. That's disgusting," said Joy Lesploitanala, a 19-year-old gay woman who was planning on moving to Canada had the law passed, in an exclusive interview with TheYellowDailyNews.

The failure to repeal the law, despite White House backing and majorities in Congress, marked a low point in the more than decade-long effort to rid a policy begun under President Bill Clinton. Democrats thought this was their best chance to undo the 17-year-old measure after President Obama had won the support of Defense Secretary Robert M. Gates and other military leaders to get rid of it.

"Just because they can't marry, doesn't mean gays shouldn't serve in the military and possibly get maimed, mutilated or killed in the name of foreign policy," Obama said in an exclusive interview with TheYellowDailyNews.

A senior Republican Senate aide, in an exclusive interview with TheYellowDailyNews, said that although some GOP lawmakers don't necessarily oppose repeal, they don't want to act before a Pentagon review of the proposed policy change has been completed.

A source familiar with the Pentagon review, in an exclusive interview with TheYellowDailyNews, said the report is expected to show that, if gays and lesbians are aloud in the military, thousands of high-ranking military officers would be aloud to continue serving.