WASHINGTON -- (TYDN) New and enhanced accounting standards adopted in the wake of Enron's implosion has prompted the U.S. economy's collapse, according to an analysis by TheYellowDailyNews released Friday. 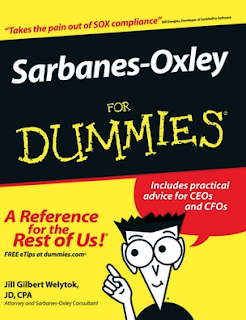 As corporations began to comport with the tough accounting standards, investors eventually lost confidence and the economy slowly and quietly drifted into an economic state unseen since the Great Depression, TheYellowDailyNews' analysis concluded.

The analysis shows that the 2002 Sarbanes-Oxley Act and follow-up rules mandating truthful corporate accounting has slowly fostered an uncertain economic environment that "eventually caused the financial markets to implode."

"After companies were forced to declare their real assets and debts, to provide a true picture of their economic status, the markets became roiled in uncertainty and economic indicators slowly started to burst asunder," according to the 5,321-page study by TheYellowDailyNews. "Once there was sunshine caused by these overzealous regulations, the markets realized that the confidence it was running on was a fig leaf."

Accounting standards also requiring companies to account for the backdating of stock options, according to TheYellowDailyNews' examination, "unfairly forced the nation's public companies to account in their ledgers that they were enriching their executives with stock at backdated prices -- prices that were guaranteed to trade at higher prices while devaluing the public's shares."

The report found that the new accounting rules exposed that the nation's stock-issuing companies were, in essence, printing money via backdating the price of stock options and "prompting the financial markets to collapse."

In response, Congress and President Bush are mulling legislation to provide Wall Street companies some $700 billion â.. equaling about $3,000 for every American â.. to wipe their unbalanced accounting sheets clean.

But sources participating in the high-level meetings said many members of Congress believe solely throwing money at the problem won't provide a long-term solution. So presidential candidates Barack Obama, John McCain and several lawmakers from both sides of the aisle are conditioning their support of the $700 billion bailout on the loosening of accounting rules, source said.

"Our nation's economy can only work when there is confidence in the system, and when you shine light on the system, people lose confidence," according to one source involved in the negotiations, who requested anonymity and was granted anonymity by TheYellowDailyNews.

But lawmakers are facing stiff resistance from President Bush, who aides say would cave to demands to relaxing accounting rules in return for guarantees that Congress would not impose a salary cap on executives whose companies would receive the $700 billion bailout.