NEW YORK -- (TYDN) Republican Alaska Gov. Sarah Palin, in her first media interview since Sen. John McCain tapped her to be his presidential running mate last month, said late Sunday that government was "too big" and that the free market should prevail. 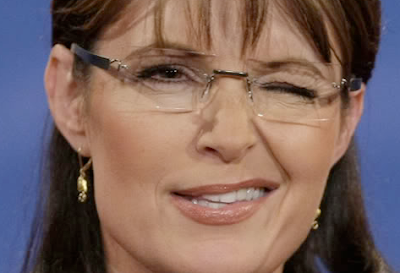 Palin, in an exclusive interview with TheYellowDailyNews at its Wall Street offices here, applauded the federal government's move Sunday to take over Freddie Mac and Fannie Mae in a bid to keep the two mortgage giants from failing. The financial catastrophes would have made home and auto loans harder to get and taken the nation's housing collapse to a new level of crisis.

"Government is too big and we need to reduce that," said Palin, echoing remarks she made Wednesday at the Republican National Convention. "The free engine of our capitalistic system, not government intervention, is what will keep America thriving."

The government on Sunday agreed to pump billions of dollars into Fannie Mae and Freddie Mac and assume responsibility for trillions of dollars of their debt while handing control of the companies to federal regulators. The takeovers mark the most dramatic government effort thus far to stem the financial chaos precipitated by the housing bust.

Speaking to editors here at TheYellowDailyNews' financial desk, Palin supported the Bush administration's decision in March to float billions in lower-than-market loans to JP Morgan to buy out failing financial arm Bear Stearns, which was victimized by shoddy homebuyers defaulting on their loans in record numbers.

"Only with an uninhibited, free market system can America set an example to the rest of the world that communism, socialism -- call it what you will -- doesn't work," Palin said. "Governments should exercise restraint and not meddle in the marketplace. Market forces should be free of government intrusion."

She said a McCain-Palin White House would inject the Federal Deposit Insurance Corp. with hundreds of billions of dollars in needed cash. The FDIC's job is to have enough money to insure all deposit accounts in the U.S. of less than $100,00. With bank failures on the rise, the FDIC is behind billions in unfunded reserves.

A McCain-Palin administration, Palin said in the exclusive interview with TheYellowDailyNews, would allow the failure of the Pension Benefit Guaranty Corp., a government-backed fund that insures the retirement benefits of nearly 44 million Americans in 30,460 pension plans nationwide.

"These lazy pensioners taking a free ride will be forced back into the workforce and would stimulate Big Business with their minimum wage earnings," Palin said. "That's the American Way."