Bush to Americans: ‘You are Not Dead Because of Me’

WASHINGTON -- (TYDN) President Bush, marking the seventh anniversary of the Sept. 11 terror attacks, said Thursday all Americans would be dead if it was not for his administration's actions following the worst act of terrorism on U.S. soil. 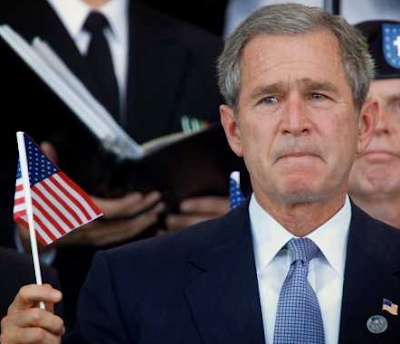 "You're not dead because of me," Bush told mourners here in a solemn speech under cool, cloudy skies -- a day quite unlike the crisp, sunny day on which the attacks occurred. "You have taken your lives for granted because, following the attacks, the country has seen the onset of two wars, Hurricane Katrina, the collapse of the housing market and the banking system. Human nature to forget has long kicked in."

Bush was speaking eloquently here outside the Pentagon, where 184 men, women and children lost their lives when a hijacked plane piloted by Saudis crashed into the side of the nation's military headquarters -- a day that changed the world forever.

The commander in chief said Americans, because of him, have been alive for 2,557 days since that attack, and a similar one that felled the twin towers at New York's World Trade Center the same day. As many as 2,500 innocents perished there "along with the symbol of capitalism," he said.

"Our military is now engaged with the enemy in the Middle East, where more than 4,000 of our soldiers and countless tens of thousands of others â.. men, woman and children -- are involved in trying to survive a terror attack every day so you can, and will, live another day," Bush told thousands of mourners who began weeping at his feet here.

"Our policies, including forbidding travelers from bringing their deodorant on airlines, have prevented numerous terror attacks here at home. Disclosing what terror attacks I'm speaking of would make us ripe for another attack," Bush added.

Bush, who was careful not to politicize his speech, continued, saying he "invaded Iraq a long time ago, for reasons that escape me, and that the carnage there and in my war in Afghanistan and elsewhere is keeping you alive and you don't even know it."

Bush said because of him, Americans "have the freedom to pretend that I haven't kept you alive for the 2,557 days following the terror attacks, that I haven't secured you're freedom and your right to vote for new leaders who will also keep you alive."

Presidential rivals, Sen. John McCain, and Sen. Barack Obama, declined comment. They had agreed to suspend, for one day only, invoking the Sept. 11 attacks for political gains ahead of the November election.