WASHINGTON -- (TYDN) Alaska Gov. Sarah Palin energized the Republican ticket to the White House when she debuted last month at the GOP convention wearing a tight skirt as her perkiness surprised voters on both sides of the political aisle. 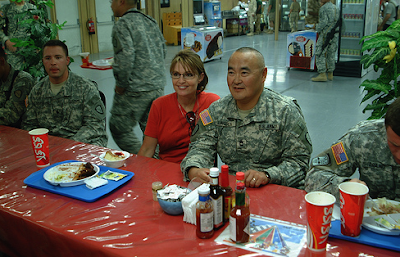 But a month and an additional 5 to 7 or more pounds later, her allure to the coveted group of undecided male heterosexual voters ages 18 and up is starting to slip, TheYellowDailyNews has learned.

"This segment of coveted voters is seemingly growing tired of her repeating herself over and again and she seems to be getting heavier," Nielsen Media analyst Dexter Moninaster said in an exclusive interview with TheYellowDailyNews. "This voter segment is used to this type of phenomena and was looking for something more instead of the same old, same old thing they're used to coming home to every night after work."

"This is a non issue to begin with. These two coveted voter segments can associate with this and they crave it whether they know it or not," Zscheckouts said. "The election is in November, so she can't get much bigger by Election Day anyway. And she's years away from Hillary."

"Her going hunting is capturing a lot of voters in this coveted category," poll spokeswoman Iwana Baelin said in an exclusive interview with TheYellowDailyNews. "There's no pro football in Alaska, and that's really hurting her allure in the coveted category of voters who might be more accepting of who she is, or who she is becoming."