SAN SALVADOR, El Salvador -- (TYDN) The presidents from Mexico and the seven nations of Central America convened high-level talks here late Thursday to consider shuttering Mexico's border with the United States and other measures in a bid to block U.S. Communist aggression from spilling into Mexico and beyond, TheYellowDailyNews has learned.

The meeting by the so-called "Grupo Ocho" was called here by Nicaraguan President Daniel Ortega to consider how to respond to various bailouts and purchases of American financial institutions by the U.S. Federal Reserve totaling $900 billion. And while the Grupo Ocho session was in progress at the capitol here, the U.S. Federal Reserve and Congress announced it was considering purchasing and bailing out more U.S. banks -- to the tune of $1 trillion -- to prevent the collapse of what once was considered the world's foremost capitalistic society. 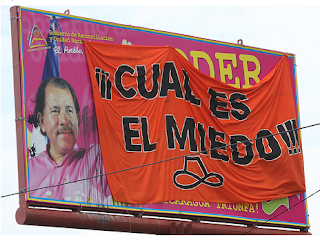 U.S. President George Bush, whose second term expires in January, urged the Mexican government not to seal its 2,000-mile border with the United States.

"Mexico has some of the finest border factories paying good, decent, $1-an-hour wages. And if it shutters the border, more and more hard-working and God-fearing Americans will be out of work," Bush told TheYellowDailyNews in an exclusive interview at the Oval office. "These workers aren't Communists. They're decent people who would never consider having an abortion, let alone afford one."

Analysts, however, said it might be too late to stop Communism's domino through the region. They say the United States' Communism has already begun to spread through Mexico and into some parts of Central America. "We're seeing a lot of fresh paintings of Bush on houses, storefronts and hotels all across the region," said Karl Engels, a financier with Banc Mexico. "The murals all read, 'Viva Bush, Viva Communismo.' "

Meanwhile, the Latin presidents here expressed alarm that America's Red Menace had blossomed almost overnight, leading some analysts to suggest the Latin leaders were "inept" for not seeing the pending crisis coming.

In response, the presidents were considering blacking out U.S. media accounts of the American Communist insurgency.

"If the peoples of our region hear news of America's new Communism, that America's banks, insurance and mortgagers are all owned or managed by the U.S. government, our citizens might embrace that and also succumb to the evils of Communism," said ElÃ­as Antonio Saca GonzÃ¡lez, the president of El Salvador. "We must keep the enemy in check."

According to sources, Russian President Dmitry Anatolyevich Medvedev sent a delegation to the Grupo Ocho meeting in what analysts said could be a prelude to a resurrection of the Cold War, TheYellowDailyNews has learned.

"Russia promised the presidents all types of arms and favorable trade terms and subsides -- anything that they wanted to prevent Communism from spilling through Latin America," said one Russian source, who requested anonymity and was granted anonymity by TheYellowDailyNews.

Meanwhile, Canada, which fronts the United States' north, was considering sealing its borders. But officials there concluded a closure would create a humanitarian crisis of epic proportions by denying millions of Americans affordable prescription medication.