NEW YORK -- (TYDN) Building a mosque near Ground Zero, where Islamic terrorists crashed two planes into the World Trade Center twin centers on Sept. 11, 2001, will prevent another attack there, TheYellowDailyNews has learned. 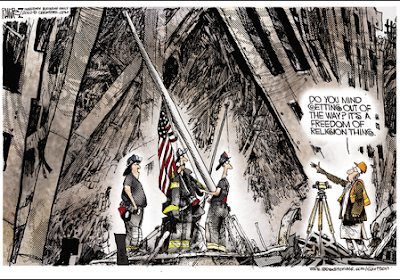 The mosque controversy is not about tolerance or the First Amendment. It's an issue of safety for all New Yorkers.

That is why the mosque should be built and viewed as a symbol of New York strength. It's a symbol that might make future Islamic terrorists attack another location in the United States instead of this New York area where they would have their own mosque.

So what if the mosque becomes a palace to al-Qaida and Muslim extremism? It's a trade-off of sorts for New Yorkers. Yet it's a win-win as long as the extremists use the mosque to plot their attacks to occur away from New York City.

To be sure, this is not a Timothy McVeigh memorial near the Oklahoma City federal building. This is a tribute to Osama bin Laden, and it must be built to defeat the threat of terrorists who want nothing more to attack New Yorkers' freedoms.

Why would the terrorists plot another attack in which their own mosque might be blown up? That wouldn't make any sense! 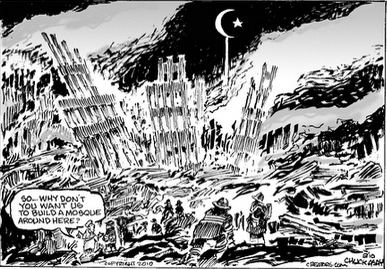 Unfortunately, the mosque debate has become overheated, politicized and counterproductive.

TheYellowDailyNews believes that most Americans who oppose locating a mosque near Ground Zero are neither anti-freedom nor anti-Muslim. They just don't believe it is respectful, given what happened there.

But New Yorkers should embrace the mosque. Moving the mosque to Montana won't protect New York from another deadly attack. We all know that.

This is a safety issue solely. Let's not forget the 3,000 dead Americans from 9/11, most of them New Yorkers.

By now, New Yorkers should be sick of being victims of terror attacks.

If New York is not the force of reason in the age of extremism and terrorism, where is?