Bush Resigns, Unresigns For ‘Good of the Nation’

WASHINGTON -- (TYDN) President Bush unresigned Friday, moments before he was to announce his resignation at a hastily called news conference here, TheYellowDailyNews has learned. 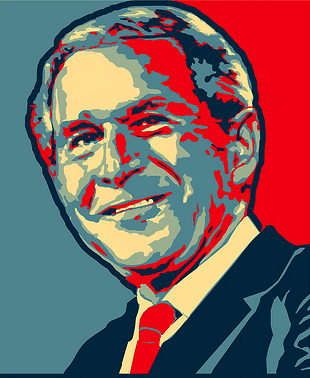 Political analysts said the unresignation avoided a constitutional showdown over Bush's successor, a crisis unseen since the Watergate and Monica Lewinsky scandals.

The initial decision to resign came after it became clear to the president that his almost eight years in office were a failure domestically, internationally and monetarily. There's no end in sight to the Iraq War, gasoline costs have tripled, housing prices are plummeting while unemployment is on the rise. The nation's stature with the rest of the world is at an all-time low, and the economy is verging on recession, the president said in an exclusive interview with TYDN.

"I'm not even sure I remember why I invaded Iraq five years ago. Do you?" the nation's Republican commander in chief said minutes before his Rose Garden appearance. "But the sacrifices our nation's poor and middle class are making in the Middle East and economic theater will ensure a stronger and even larger upper class."

Still, the president said there was plenty of blame to go around. "Americans who chose to invest in sheltering their families with a home instead of purchasing oil futures simply made a bad choice," he said. "And that's what's so great about our country, that we have the freedom to invest on the fruits of others' labors."

Bush said he decided to continue his post as chief executive amid intense pressure from lobbyists and Republican and Democratic lawmakers alike. As the nation's 43rd president was about to announce his resignation before a throng of reporters, Bush decided to stay on and do "what was for the good of the nation," he said in an exclusive Oval Office interview.

"If I was to resign, Dick Cheney would assume the presidency," he said. "That's one errant heart palpitation away for Nancy Pelosi, the House Speaker, to take over."