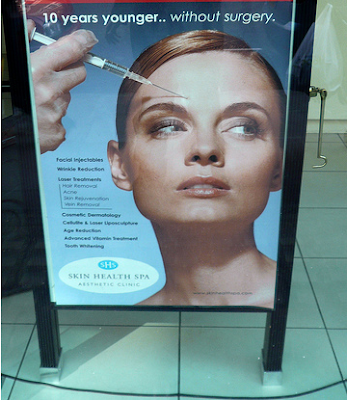 Academics blasted the November study by the Journal of the American Academy of Dermatology, saying the academy cast its member dermatologists in a negative light by exaggerating wait times.

In a report to be released Monday and obtained Sunday by TheYellowDailyNews, the Pepperdine University School of Dermatology-Plastic Surgery, which has catered to many Hollywood stars including Pamela Anderson, the Olsen twins and Dyan Cannon, decried the academy's report as being "sensationalist and against what all professional dermatologists stand for."

Among other things, the university's report, after surveying 500 Botox-injecting dermatologists in the greater Malibu area, found that the wait time for the wrinkle-removing shots was only six days on average, not the eight days the academy reported.

"The American Academy of Dermatology is casting dispersions on our profession. Our study shows dermatologists, as a profession, are much more responsive, 25 percent more, than what the public has been made to believe," Pepperdine researcher Adam Sarapoga said.

Sarapoga urged his fellow 25,000 Botox-injecting colleagues in the greater Malibu-Hollywood area to withdraw their membership from the academy to protest what he said was "the biggest defamation campaign against dermatologists by dermatologists since the Food and Drug Administration approved the injection of botulism into the body's skin in 2002."

According to the American Society of for Aesthetic Plastic Surgery, Botox is the top, non-surgical cosmetic procedure in the United States. Botox is derived from a bacterium known as botulinum, among the most poisonous and naturally-occurring substances in the world. A small amount wrongly applied can paralyze or kill human beings.

Still, the Pepperdine researchers also faulted the academy for exaggerating that it took a full 26 days to get an appointment to see a dermatologist to examine a potentially cancerous mole. According to the Pepperdine study, wait times were slightly more than 25 days, not 26 days.

"This is another example of how our own trade group is out to destroy its own profession," Sarapoga said. "That academy report is just a big, and wrong blemish on us all."

According to The Skin Cancer Foundation, skin cancer is the most common form of cancer in the United States. One in five Americans get it. About 90 percent of skin cancer is basal cell carcinoma --a small, shiny bump or mole-like nodule on the skin.

Botox patients pay about $800 out of pocket for their injections. Insurers do not cover the cosmetic procedures and dermatologists usually receive the money up front.

Insurers, however, do reimburse for mole examinations, which bring in a much smaller amount of money. And dermatologists must wait months before insurance companies pay for the routine, non-cosmetic examinations.