RIYADH, Saudi Arabia -- (TYDN) Female suicide bombers walked off the job here and throughout the region late Thursday, demanding 72 virgins in the afterlife upon detonation, TheYellowDailyNews has learned. 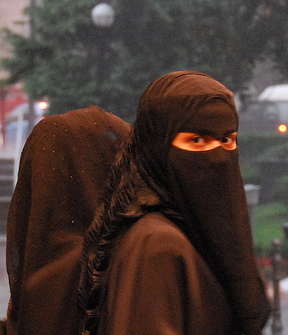 The strike, in a bid to put female bombers on an after-detonation par with their male counterparts, is an attempt to disrupt suicide missions in Afghanistan, Beirut, Iraq, Israel, Syria and elsewhere in the Middle East, according to union sources briefed on the strategy who requested anonymity because they have not been authorized to publicly discuss the strategy.

The walkout, to be announced here Friday, was called by Dubai International Female Detonators Organization, the region's largest trade union representing women suicide bombers with 25,000 members jihadwide. The membership is demanding the same number of virgins their male suicide-bombing counterparts receive upon reaching "paradise" after they blow up themselves and countless other innocents.

Despite the strike, however, negotiations continued through the night. Union representatives said the membership agreed to settle for male virgins instead of non-virgins in a bid to expedite the bargaining process. The union's five-year contract, signed following the U.S. invasion in Iraq, expires May 1.

Western diplomats and counter-terrorism experts were reviewing the impasse. One high-ranking Pentagon official, who spoke on condition of anonymity because he has not been authorized to publicly discuss the strike, cautioned that the walkout might have little impact.

The official noted that the union's bargaining strength has been dwindling daily since the organization was formed here in the aftermath of the Sept. 11, 2001 terror attacks in the United States.

"There seems to be a seemingly endless supply of male suicide bombers available," the Pentagon official said. "There has been a jump in their numbers after our invasion of Iraq five years ago. We're still reviewing whether there is a correlation."

The Jihads National Organization for Women and other woman's rights groups, however, suggested the picket lines would put the squeeze on terror efforts by Middle Eastern governments or factions in the region, a prediction several analysts suggested was overly optimistic.

The lockout, which is unusual for a union to declare a week before the expiration of a collective bargaining agreement, is a push to open the door to woman's rights in a region where virtually none are provided, said a spokeswoman for the Jihads National Organization for Women, in an exclusive interview with TheYellowDailyNews.

"This is only the beginning," said the spokeswoman, who requested anonymity for fear she would be caned to death for speaking publicly. "Next, we plan on fighting for the right to show our faces in public."

The King of Saudi Arabia, speaking here in the Saudi capital of Riyadh where OPEC officials were honoring President Bush for his part in tripling oil prices, said he would not acquiesce to union demands and would urge others to follow.

"The next thing these women will want is to drive cars, vote and even walk alongside their husbands," Abdullah bin Abdul Aziz Al Saud said in an exclusive interview.

President Bush, seated here next to the king and ministers from the Organization of Petroleum Exporting Countries representing Iran, Venezuela, Nigeria, Qatar, the United Arab Emirates and other countries, applauded the king's decision. Noting that Saudi Arabia is the world's largest oil-exporting nation and one of several U.S. allies in the Middle East theater, Bush said it was the right decision to disengage with the union, which he derided as a "sponsor of terror."

"The king understands that we should never deal with terrorists," Bush said in an exclusive interview with TheYellowDailyNews.

A union spokeswoman, during an exclusive interview with TheYellowDailyNews at a jihadist training camp in the no-man's land separating Pakistan and Afghanistan, said the walkout came just as 10 female jihadists were dispatched to Sadr City, a Baghdad slum that has been the target of repeated suicide bombings.

"These women, who were on their way to kill innocent men, women and children, and themselves, deserve martyrdom on equal footing. Period," said the spokeswoman, who requested anonymity out of fear for her life. "We will no longer settle for our husbands in paradise."
Photo: tinoubao