The House passed legislation last week keeping CEO pay to no more than 1,000 times average worker salaries -- a ceiling of roughly $26 million annually. As of Tuesday night, the Senate was debating a similar proposal -- a $30 million annual cap -- that the president derided as "communism." 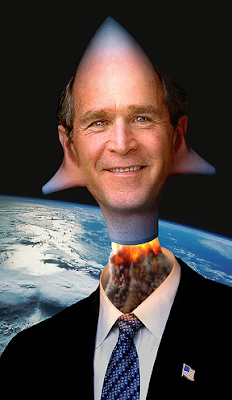 Many Wall Street analysts applauded the tough talk. If either plan became law, they said, American enterprise and their leaders would likely abandon the United States for overseas tax havens, territories where CEOs already do their personal banking. "This proposal is anti-American and anti-worker," Bank of America analyst Josh Duboinken said. "If this became law, the average worker would shoulder an even bigger tax burden."

Bush -- while outlining the government's recent bailout of Bear Stearns, the need for the government to reduce interest rates further, the necessity for the Treasury to print more dollars and for the government to back more mortgages and student loans -- told the National Press Club here that "meddling with what CEOs earn smacks of communism and goes against our nation's hands-off approach to capitalism and our non-interventionist economy at large."

"For the government to say how much pay somebody can make is regulation at its worst and my head wants to explode just thinking about it," Bush said, as he took the opportunity to urge Congress to end the federal minimum wage of $5.85 per hour. "Deregulation is what we need for our economy to be free of shackles."

The CEO pay cap legislation comes as the U.S. economy is headed toward recession, as energy and food prices surpass all-time highs and as unemployment creeps upward.

Worker rights groups derided both the House and the Senate bills. They called the packages "smoke and mirrors." They noted that the wage ceilings can be surpassed with bonuses, restricted stock, backdated stock options and other long-term incentive awards.

"We can live with CEO packages of 1,000 times the average worker's pay," said Devin Martin, a spokesman for the AFL-CIO. "But once you go beyond that, that's going to start to hamper morale of the rank-and-file."

Sen. Majority Leader Harry Reid and House Speaker Nancy Pelosi were not immediately available for comment. Spokesmen for the two said they were drafting a multi-billion-dollar Iraq War package that would continue financing the operation indefinitely.