CHICAGO -- (TYDN) Wrigley Field, the nation's oldest Major League Baseball park after Fenway, is being renamed the Fukudome for the Cubs' all-around sensation from Japan, Kosuke Fukudome, TheYellowDailyNews has learned. 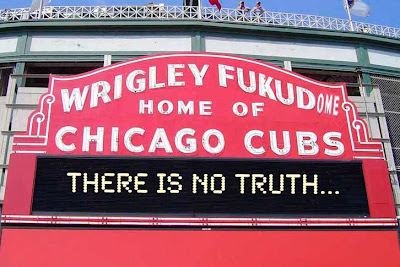 Three sources, speaking on condition of anonymity because they have not been authorized to discuss the name change, confirmed Tuesday that Sam Zell, the billionaire real estate magnate who acquired the Cubs as part of an $8.2 billion deal for the Tribune Co., would rename the historic ballpark along Addison Avenue here. The cost-cutting move is to lure the 30-year-old overseas baseball stalwart who few American's have heard of.

Fukudome, (pronounced "Fuh-q-dohm"), the outfielder-slugger who just signed to a $48 million, four-year-deal, demanded substantially higher wages until Zell and Fukudome's agent agreed to the one-of-a-kind accord, these sources said.

"We all knew Zell wanted to sell the naming rights. But there was a lot involved: money, history, nostalgia, ego and a lot more," one of the negotiators told TYDN. "Zell was this close to naming it the Viagradome."

A spokesman for Mayor Richard M. Daley, when contacted of the developments by TYDN, was initially flabbergasted by the news but declined immediate comment about the name change, to be unveiled at the Cubs' next home game April 15 against Cincinnati.

"We are reviewing our campaign contribution reports and will issue a statement shortly," Daley spokesman Billy Davis said.

After TYDN broke the news on its web site, ESPN and other news agencies carried similar but awkward-reading headlines: "Wrigley Field Renamed the ***udome." An ESPN spokeswoman said the cable sports channel was being consistent in its coverage, and referred a TYDN reporter to its box scores and Cubs' game coverage.

Wrigley Field is known for its ivy-laden outfield and, among other things, for Babe Ruth's "called shot" when he pointed to the bleachers during Game 3 of the 1932 World Series and hit a homer off Charlie Root's next pitch. It was the last Major League Baseball stadium to install lights, having night games in 1988.

Fans' reaction to the stunning development was mixed. A throng wearing blue and red littered the streets here along Clark and Addison streets, chanting "Fuku, Fuku."

Sources close to the deal said it would, for a few weeks at least, act as an employee-saving tourniquet at the nation's second-largest newspaper publishing company, where hundreds of journalists and others have already been dismissed at the Chicago Tribune, Los Angeles Times, Newsday of Long Island, Baltimore Sun and a host of radio and television stations under the Tribune Co. umbrella.

Zell, like his media-ownership counterparts, is refocusing an industry that many say is overly focused on newsgathering rather than profits.

"This could stop the blood-letting for weeks, if not months, under the Tribune portfolio," Goldman Sachs money manager Efrin O'Hara said. "And what better way than leverage a name of a stadium to get a player on the cheap at the same time."

Food industry analysts suggested the repackaging of the stadium's menu alone could be worth hundreds of millions if marketed and branded appropriately. "Can you imagine the value of hot dogs, popcorn, peanuts and even beer under this brand," Zida Sogrofos, a Bear Stearns analyst, said. "The Babe Ruth candy bar is so yesterday."

Fukudome's agent, Joe Urbon, initially declined to acknowledge the stadium name change or give specifics of the deal. But after prodding by TYDN, he said Fukudome, a native of Kagoshima who batted .305 his entire career, was pressing to sign for $62 million but settled for substantially less, $48 million over four years.

Zell, Urbon said, was initially hesitant to rename the stadium, which was built in 1914 and first known as Weegham Park before the chewing gum family purchased the Cubs and later adorned its masthead in 1926. But Urbon said Zell came around after concluding the deal made dollars and cents.

"The Wrigley's have been getting a free ride for, what, decades?" Urbon quoted Zell as saying.

Fukudome batted .305 with a .397 on-base percentage and a .543 slugging percentage during a nine-year stint with the Chunichi Dragons. He was Japan's Central League Most Valuable Player in 2006. The left-hander was sidelined for the bulk of last year's season with an elbow injury.

TheYellowDailyNews (TYDN)
is satirical parody. Any rational relationship to reality is coincidental.