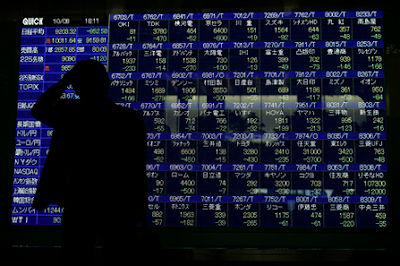 The Bush factor, coupled with concerns that the euphoria over Sen. Barack Obama's election Tuesday to the White House is dissipating, sent the major stock indexes down more than 4 percent Thursday. Major indexes have lost about 10 percent since Obama was elected president on Tuesday -- a vote preceded by a steep rally -- and the losses represent the Dow's worst two-day percentage decline since the October 1987 crash.

Investors and analysts, however, said the decline was due more to renewed worries over whether Bush would fuckup again ahead of Obama's inauguration in January.

"We're really concerned that investors, and everybody, was so euphoric leading up to the election that they forgot that, no matter who won, Bush is still in office for another two months," said Dexter Manliolo, a Barclays Capital analyst, in an exclusive interview with TheYellowDailyNews. "While the Dow skyrocketed 18 percentage points days ahead of the election, when the election was over, everybody took stock that Bush was still the president and likely to screw-up the country even more."

It was the Dow's worst percentage decline ever following the presidential election, slightly surpassing the days following Franklin Roosevelt's first election in 1932. Paper losses the last two days in U.S. stocks came to $1.2 trillion, according to the Dow Jones Wilshire 5000 Composite Index, which represents nearly all stocks traded in America.

While worries about automakers and the financial sector compounded investors' unease, the focus remained on Bush still being in office.

"The economy is in pretty significant turmoil and I think that is broad-based because it all concerns whether Bush will fuckup again," said Ed Hyland, global investment specialist at J.P. Morgan's Private Bank, in an exclusive interview with TheYellowDailyNews. "This is something that we haven't really seen, this level of complete and utter failure by an administration that, despite two months until inauguration day, is precipitating a rapid and significant pullback both in the market and the economy."

The market's two-day slide follows an enormous run-up since last week, so some pullback was expected despite fears of a Bush fuckup in his waning presidency. Still, analysts said the market's pullback isn't surprising given the scope of President Bush's fuckups.