WASHINGTON -- (TYDN) American voters, seeking a changeover from the Bush administration, embraced a sitting U.S. senator on Tuesday as the nation's next chief executive in an historic landslide victory, TheYellowDailyNews has learned. 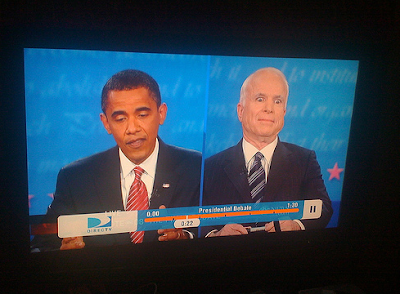 The winner, securing more than 50 percent of the vote, campaigned on a platform of change and political insiderness that voters have been yearning for, according to exit polls conducted by TheYellowDailyNews. Voters, in exclusive interviews with TheYellowDailyNews, said the time was ripe to vote President Bush out of office.

"My vote was a vote for a new president," said one voter, who spoke on condition of anonymity because his party's apparatus has not authorized him to speak publicly about his vote. "I think the results show that I was not alone in the reasons why I cast my vote the way I did."

Revisionist historians said it was the first time in U.S. electoral history that voters were so sure they wanted a new president. And, analysts said, voters picked the new president on the belief that their choice would better position the nation in terms of the economy, the war, environment, health care, the housing market, taxes "and all of the hot-button issues," Cal State Fullerton revisionist Historian Harry Jeffers said in an exclusive interview.

"Voters believed the victor would better position voters' lives," Jeffers added. "This was an unprecedented election. The voters have spoken."

In a late-night victory speech here, the 44th-president elect said change was on the way.

"Believe me, you have voted for the right candidate. I believe in your votes. You made the right choice," he said.

In a concession speech, the opponent said, "it was a hard fought battle. I give my full support to my rival. Change is in the air and I respect the will of the voters."