WASHINGTON -- (TYDN) The Federal Reserve agreed early Monday to an unprecedented deposit into the nation's sperm banks -- which are nearing impotency -- as part of a multi-pronged package to erect the nation's now-flaccid industry, TheYellowDailyNews has learned. 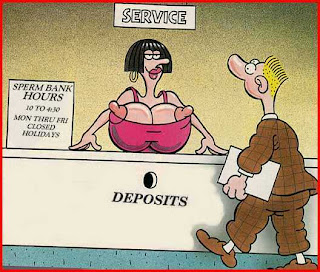 Federal authorities, speaking to TheYellowDailyNews on condition of anonymity, acknowledged that failing to lubricate the sperm banks, once a pillar of industry, could have penetrating ramifications across the economy. The banks say they are almost tapped out, and require fresh seeding to keep their engines humming.

Still, the infusion of fresh resources into the sperm banks was not without controversy, according to well-positioned federal authorities, who spoke to TheYellowDailyNews on condition of anonymity.

"We're concerned that these banks aren't focused, that there's a lot of jacking off going on there," one federal bailout official told TheYellowDailyNews on condition of anonymity. "With the way the economy is shrinking, we're not sure whether we want to release a new injection to prop up these banks that might not last."

But after days of gyrating on the issue, senior Fed officials agreed to the immersion amid fears the banks' un-liquidity could result in a pounding across market sectors.

"Finally," Jeffers said, "the Fed inserted the bone that the banks have so much been needing to give birth to a new economy."