Glendive, MT. -- (TYDN) Tens of thousands of worshippers were lining up for miles outside a small farmhouse here hoping to get a glimpse of what Vatican authorities confirmed was the image of Jesus appearing in the smudge of a well-thumbed iPhone, TheYellowDailyNews has learned. 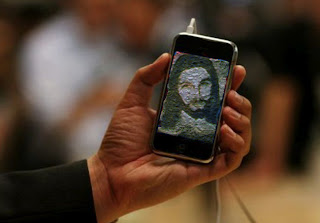 The pilgrims, some of them walking days to this modern-day Mecca, have come to see the vision of the son of God himself as he appeared on Dan Smith's new iPhone. The discovery by Smith, a 38-year-old hog farmer and father of two, prompted a wave of the faithful to perform the Hajj and descend on this tiny farming community of 5,000 -- about 200 miles outside Montana's capital, Helena.

Vatican scholars said it was the first time that the image of Jesus has appeared on an iPhone, a device known for its smudgy surface where shapes of Steve Jobs' brain often appear. The Vatican scholars, who arrived here late Tuesday from Rome, told TheYellowDailyNews in an exclusive interview that the image was indeed of Jesus Christ.

Smith, who had bought his black 8 gig iPhone two days before online, said the image was a blessing from above.

Street vendors were hawking Jesus-on-an-iPhone soap while others were distributing the latest iPhone wallpaper app replete with pictures of Jesus, Mother Mary, the Pope, Steve Jobs and other holy ones and places.

Many worshippers in the lineup to view the holiest of iPhones were concerned they were doomed to a life in hell. They were seen frantically attempting to rub the image of Jesus on their iPhones.

And as the crowed grew tense, a riot erupted when rumors surfaced that Smith accidently smudged away Jesus' image to answer a call on the popular touch-screen phone.