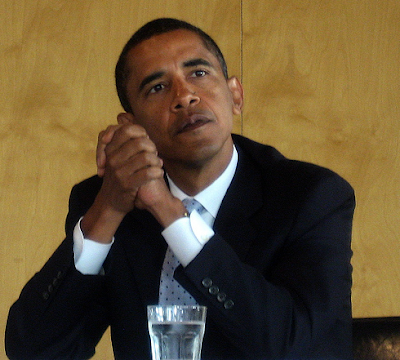 The Black Friday 5 a.m. stampede plunged the Wal-Mart into chaos. Several employees were kicked to the ground. Others scurried atop vending machines to avoid the horde searching for deals from everything from board games to tin foil to toilet paper and video-games.

"This stampede, like a Who concert stampede, shows that consumers have money and are willing to spend," Obama told TheYellowDailyNews in an exclusive interview. "That hordes were clamoring to get into the Wal-Mart underscores that there's hordes of investors on the sidelines ready to invest in an Obama economy, in a future America."

When the stampede's madness ended, 34-year-old Wal-Mart employee Braden Morehouse was dead and four shoppers, including a woman eight months pregnant, were injured.

"He was bum-rushed by 200 people," said an elated Wal-Mart manager Jimmy Underby. "Visible through the front glass window that the crowd shattered, I had built the most geometrically sound display of Christmas, I mean, holiday wrapping paper replete with bows. They could see it from outside and they took the doors off the hinges to barrel inside. Braden was trampled and killed in front of me and he didn't die in vain."

Wal-Mart insiders said they would have administered first aid and perhaps saved the employee's life. However, they said it was company policy not to use store products for personal use. They feared being fired if they helped their co-worker.

"I remember when Johnny from the produce department had jock itch real, real bad and was fired after he grabbed some power to extinguish the itch," Justin Lamardio said in an exclusive interview with TheYellowDailyNews. "He was gonna pay for it but couldn't stand the burn and needed instant relief and got fired before he could fork over the $1.59."

Another employee, Ramsus Arnetticas, said he ran to the first-aid section for a tourniquet to "put on the trampled dude's head."

"I thought this might save him. But the price rang up wrong and we needed to do a price check on aisle 11," Arnetticas continued, saying he didn't care whether he got fired. "He was just sprawled out there on the ground in front of the wrapping paper display with everybody just stomping on top of him. I didn't use wrapping paper to stop his head from bleeding because that would have been, you know, weird and sacrilegious and all."

Even officers who arrived to perform CPR on the trampled worker were stepped on by wild-eyed shoppers streaming inside.

Shopper Dennis Densomre, who left the store with 10 packages of wrapping paper, a bagful of free popped-corn and "a 99-cent package of water balloons for the little one," said he was disappointed that the authorities shut down the store so "they could scoop up the dead Wal-Mart employee."

"His body was a stepping bag that allowed dozens of people to get that coveted wrapping paper that was on sale. He's a hero," Densomre told TheYellowDailyNews in an exclusive interview.

The melee began when an estimated 2,000 shoppers gathered outside Wal-Mart's doors in the predawn darkness, witnesses said.

Chanting, "push the doors in," the crowd pressed against the glass as the clock ticked down to the 5 a.m. opening. Sensing catastrophe, nervous employees formed a human chain inside the entrance to slow down the mass of shoppers.

It didn't work. The mob barreled in and overwhelmed workers, sparking the economic recovery the nation had been wanting.