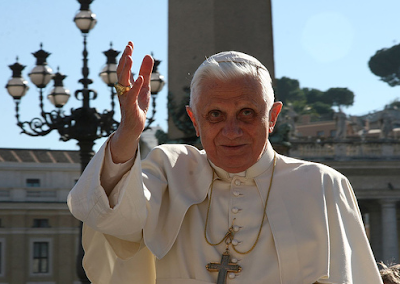 The hackers, believed to be from the actual underworld or the hacking underworld, allegedly altered the Vatican's videos and displayed what appeared to be the pontiff transforming into Satan, according to an investigation by TheYellowDailyNews, the most exhaustive investigation into what insiders privately have dubbed "Operation Pope-Satan-YouTubeGate."

It was the first time in recent memory that the Holly See's YouTube channel was hacked. The Vatican's first YouTube broadcast appeared Friday.

In response to watching the papacy mutate into what experts suggested was the devil, an untold number of the pontiff's flock began jumping from buildings, pulling out their eyes and, in some instances, binge drinking blood, according to reports. The Church immediately excommunicated those members of the flock as punishment for their sins.

"Right before God's eyes and all, the pope started to grow horns," one Vatican official told TheYellowDailyNews on condition of anonymity. "It was the worst sudden loss of faith in the Church since the sexual molestation scandal that everybody but the abused altar boys has forgotten about."

YouTube, a unit of Google, immediately pulled the Vatican's channel in a bid to quell the hysteria.

The Pope has been sequestered here amid rumors of an ongoing exorcism, sources close to the alleged exorcism said.

Still, other rumors suggest the papacy was having heavenly discussions with Apple CEO Steve Jobs on hopes of building a Vatican "app" for the iPhone. But the negotiations appeared deadlocked as each claimed he was closer to God, sources close to the alleged meeting told TheYellowDailyNews on condition of anonymity.

On Monday, in one of the pope's first foray's on YouTube, the pontiff's alleged mutation into Satan began as Benedict was welcoming viewers to this "great family that knows no borders" and said he hoped they would "feel involved in this great dialogue of truth."

The pope was trying to broaden his audience by joining the wannabe musicians, college pranksters and water-skiing squirrels on YouTube, the popular video-sharing website. A YouTube source said it was reviewing its security apparatus.

While the YouTube initiative was novel, it was in keeping with the 2,000-year-old Church's history of using whatever means available to communicate: parchment, printing press, radio, television and now the Internet.

Insiders suggested that, until Monday's hack, the pope's homilies were anticipated to reach millions of viewers -- the converted and the non-converted alike -- while giving the Holy See better control over the pope's Internet image. That hope, however, apparently backfired.

Law enforcement agencies from across the globe were engaged in an intense manhunt for the hackers, who finished their hack by broadcasting this garbled message: "We have to go. Our parents say it's time to eat dinner."