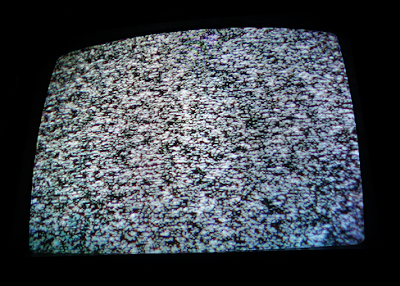 Obama said the digital transition needs to be delayed largely because the Commerce Department has run out of money for coupons to subsidize digital TV converter boxes for consumers. The millions of households that do not have cable or satellite service, or a new TV with a digital tuner, will need the converter boxes to keep their older analog sets working.

Fearing a "domestic crisis" if millions are left without the ability to watch television, Obama said such a scenario "threatens the American Way more profoundly than World War I, World War II, the Sept. 11 terror attacks, the Great Depression and the current economic meltdown combined."

"The government is not doing enough to prevent this Armageddon of sorts -- that is: Americans without television signals," Obama said in an exclusive interview with TheYellowDailyNews. "I have urged my policy advisors to stop working on solving the economic crisis and to abandon the Middle East peace process so that we can ensure that no American goes without television, particularly those in rural, poor or minority communities "

Meanwhile, federal law enforcement sources, speaking to TheYellowDailyNews on condition of anonymity, said the government was considering imposing martial law to keep the peace ahead of the Feb. 17 deadline. "Our operatives in the field are sensing unrest akin to the 1968 Democratic National Convention in Chicago but on a nationwide level," the source said. "We don't have the resources to wantonly club everybody in every major American city at one time."

In 2005, Congress required that broadcasters -- by Feb. 17 --switch from analog to digital broadcasts, which are more efficient, to free up valuable chunks of wireless spectrum. The newly available room in the airwaves can be used for commercial wireless services and for emergency-response networks.

Analysts applauded Obama's leadership. They said it was the first time in U.S. history that a president, or president-elect, responded so quickly to a pending national crisis.

"About 670,000 Americans were just added to the unemployment role, and Obama is seeing fit that these downtrodden people will at least have the ability to watch television. That is, if their homes were not foreclosed upon," said Harry Jeffers, a Cal State Fullerton revisionist historian. "Obama has great vision to see this enormous crisis coming down the pipeline."

Republican leaders immediately decried Obama's plea to subsidize more converter boxes and possibly delay the digital transition. They said it was unfair that banking and auto executives who just received billions in federal bailout money should have to pay for the poor's television signals. "This again shows that Obama is a socialist," said Republican Sen. John McCain of Arizona.

The Obama team decided to push for a delay after the Commerce Department said it had hit a $1.34 billion funding limit set by Congress to pay for converter box coupons.

The coupon program allows consumers to request up to two $40 vouchers per household to help pay for the boxes, which generally cost between $40 and $80 each and can be purchased without a coupon.

The Commerce Department said it had no choice but to start a waiting list for coupon requests. As of press time, the waiting list had requests for 1.1 million coupons.