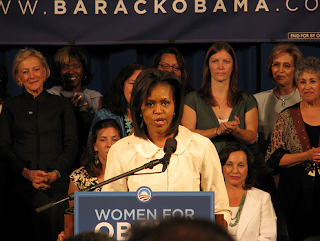 "Everybody was suggesting that it would last at least 16 months, the time he promised to pull troops out of Iraq," the first lady told TheYellowDailyNews. "Let me tell you. It fell apart within a few minutes. He pulled out quickly."

The first lady's revelation marks the first time in U.S. presidential history an electoral honeymoon fizzled moments after its inauguration, historians said. Presidential honeymoons usually last 100 days or more -- depending on circumstances -- a proposition the nation's first lady suggested was an exaggeration of "mythical proportions."

"Not even Viagra," the first lady said, "could awaken from the dead a honeymoon that the pundits were saying would last until the economy springs back to life, the troops were home from Iraq and there was health coverage for all."

Still, presidential advisors said the president has managed to remain unscathed by any missteps he has made. His ability to ask for patience depends in no small part on the first lady and public's confidence in his competence and motives.

"What's remarkable about the polls is that people are at once optimistic and realistic," David Axelrod, a President Obama senior advisor, said in an exclusive interview with TheYellowDailyNews. "They have high hopes for his presidency. They understand how deep the morass is. And that's a good position to be in."

But despite the president's crispness and certitude to remain vibrant in the aftermath of his assumption of office, aides said the first lady is growing impatient, sources told TheYellowDailyNews on condition of anonymity.

The president's ability to slow-walk some campaign promises, these aides told TheYellowDailyNews, would also be affected by how well he maintains his standing and continues to project an air of command.

"So far," Cal State Fullerton revisionist historian Harry Jeffers said, "President Obama has managed to remain unscathed by any missteps he has made, but his ability to ask for the first lady's patience depends in no small part on the public's confidence in his competence and motives, including his push to close Guantanamo Bay."