by Artis Puntintuccas, TYDN Senior Intelligence Affairs Writer
WASHINGTON -- (TYDN) Intelligence agencies for the Bush administration have concluded that Iran had trained the birds that flew into the engines of a U.S. jetliner Thursday, prompting it to plunge into the frigid Hudson River shortly after takeoff, TheYellowDailyNews has learned. 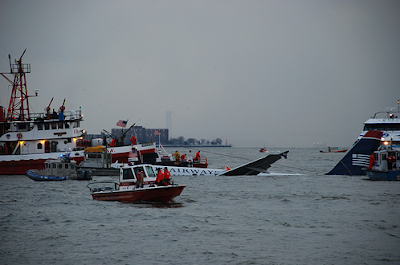 At least three administration officials, speaking early Friday to TheYellowDailyNews on condition of anonymity, said Iranian-backed terror groups had been releasing the highly trained Kamikaze birds into U.S. air space for years. Because of the highly sensitive nature of the classified intelligence, the officials declined to name the type of birds used in the attacks, which were said to have crashed or thwarted dozens of U.S. passenger flights since 1990 in what sources have dubbed the "Rein of Bird Terror."

And as a result of Thursday's crash of the Airbus A320, in which all 155 passengers survived, President Bush is expected to demand the United Nations sanction a U.S.-led invasion of Iran, which is believed to be hiding these so-called "winged weapons of mass destruction."

"Birds just don't fly into jet engines by shear happenstance," one administration official said on condition of anonymity and was granted anonymity by TheYellowDailyNews. "We have concluded that Iran has been releasing these weapons of mass destruction into U.S. air space for years. We also have evidence of an underground program that Iran is secretly training deer to disrupt U.S. street traffic. That's unacceptable."

The administration was preparing an attack on Iran even without backing of "the derelict international community," the source said. The U.N. Security Council is expected to debate the planned invasion late Friday.

Revisionist historians immediately applauded the imminent invasion of Iran, and suggested Bush's Middle East legacy will linger long after he steps down from office Tuesday.

President Bush, with just days left in his administration, has quietly shuttered U.S. aviaries and has confined aviary workers at zoos and other animal parks, where they are expected to undergo intense interrogation tactics to determine whether they were complicit with the feathered attacks.

The latest Iranian-backed bird attack in U.S. airspace played itself out Thursday afternoon in New York when a US Airways Airbus 320 made a safe crash landing in water shortly after taking off from LaGuardia International Airport.

Flight 1549's pilot reported a "double bird strike" to air traffic controllers moments after taking off, and said he had lost thrust in both engines.

Kevin Poormon, a research engineer at the University of Dayton Research Institute in Dayton, Ohio, tests the ability of airplanes and engines to withstand bird strikes by firing 4 pound to 8 pound birds at strategic points along aircraft from compressed gas guns at hundreds of miles per hour. He said he uses "freshly killed" birds or a gelatin substitute "that has similar impact properties."

If necessary, researchers can launch the birds at up to 900 mph, Poormon said. FAA requires airliners to withstand strikes from birds weighing as much as 8 pounds at particularly vulnerable points along the aircraft, he said.

"It's a pretty significant problem," Poormon said. "There have been over 200 fatalities in the last 20 years due to bird strikes worldwide and there are 5,000 impacts that are reported every year. I just never realized Iran put these birds up to it."