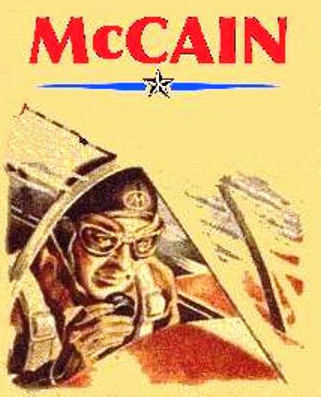 McCain said in an exclusive interview with TheYellowDailyNews that he had been sitting by his computer since the Nov. 4 election anxiously awaiting election returns, but he had trouble connecting to the Internet and powering his computer. McCain was criticized during the hard-fought campaign about his lack of Internet prowess, that he never had used a computer -- a reality he promised to change during the election.

Microsoft Corp. immediately began airing commercials blasting the iMac, the Apple Inc. desktop McCain was unable to function. Apple CEO Steve Jobs declined comment, but was said to have immediately fired the iMac engineer who designed the power switch to be hidden in the back out of sight.

Shares of both Apple and Microsoft tumbled in after-hours trading.

Historians said it was the first time since the demise of the Pony Express that a presidential candidate had waited two months to concede an election. Many analysts assumed McCain went into seclusion and was embarrassed after his stunning defeat with running mate Sarah Palin.

"There was no truth to that. A lot of editorial writers out there who owe me an apology," McCain said in an exclusive interview with TheYellowDailyNews.

McCain aides said the Arizona senator was flabbergasted after he finally figured out he had lost.

"When it dawned on him to turn on the computer and that he needed to physically connect to the Internet, he was amazed and dumbfounded over Internet news reports that Obama was selling inauguration festivity tickets for just $50,000, instead of the normal $250,000," said one McCain aide, who spoke to TheYellowDailyNews on condition of anonymity. "He just couldn't believe that Obama would belittle the presidency like that and open up the presidency to the common man."

McCain said he would distribute e-mails to the media on where and when he would deliver his concession speech. As of press time, news outlets had not received notification.