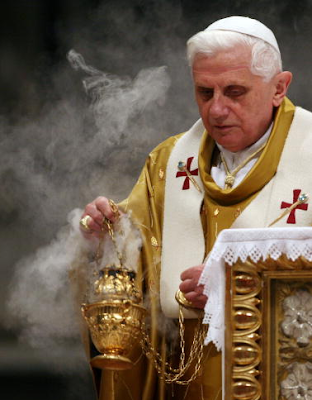 The pontiff's message of salvation, a pleading for "authentic solidarity to prevent global ruin," marked the first time the Church has sought a U.S. government stimulus package.

The pontiff's plea for a bailout came as financial ratings service likes Standard & Poor's have downgraded the Church's stock, from a rating of "buy" to "sell." Church shares plunged in after-hours trading before rebounding.

Following tradition, the pope recited his bailout message in 64 languages, including Latin, the Church's official tongue. The pontiff said it would be sacrilegious if the U.S. -- having bailed out insurers, mortgagers, bankers and automakers left the Church behind.

"May the light of a bailout shine forth and encourage all people to do their part in a spirit of authentic solidarity," he said. "If people look only to their own interests, our world will certainly fall apart."

Speaking from the central balcony of St. Peter's Basilica to tens of thousands of hastily assembled pilgrims, tourists and Romans in the square below, the pope decreed that it was the U.S. taxpayers' duty not to leave the church behind. As the global economy continues to spiral downward, Benedict said it was urgent the church receives a huge cash infusion as "an increasingly uncertain future is regarded with apprehension, even in affluent nations like the United States."

Wearing a crimson mantle against a damp chill, Benedict expressed hope that dialogue and negotiation would prevail to find "just and lasting solutions" to the Church's financial predicament and to conflicts in the Holy Land and elsewhere in the Middle East.

He decried suffering in Africa, terrorism, and called for an end to "internecine conflict" dividing ethnic and social groups.

The pope singled out the plight of those in war-torn eastern Congo, in Sudan's Darfur region, in Somalia where he said "interminable" suffering is the tragic consequence of "the lack of stability and peace" -- and in Zimbabwe where people have been "trapped for all too long in a political and social crisis which, sadly, keeps worsening."

Benedict condemned the "twisted logic of conflict and violence" in the Middle East. He lamented "the horizon seems once again bleak for Israelis and Palestinians."

"May the divine light of Bethlehem radiate throughout the Holy Land," he said. "May it spread throughout Lebanon, Iraq, the whole Middle East and to the church's coffers."