Exclusive: Jerry Brown Did Not Have Sex With Linda Ronstadt

by TYDN Political Affairs Writer Beth Guber
HOLLYWOOD, Calif. (TYDN) -- California Attorney General Edmund G. Brown Jr.'s candidacy for governor imploded Wednesday after it was revealed the lifetime politician did not have sex with Linda Ronstadt in the late 1970s, TheYellowDailyNews has learned. 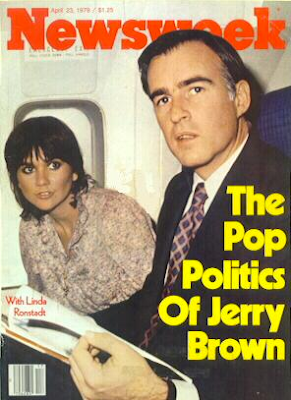 Hours after the revelation was disclosed on TheYellowDailyNews' website, the latest Field Poll showed the Brown faithful abandoning the career politician in droves. Pollsters, who had been putting Brown's match at a "dead heat" with Republican opponent Meg Whitman, said Brown's numbers plummeted after voters said they no longer could identify with him.

"Our research indicated that there's basically just one thing voters associate Brown with, and that's copulating with Linda Ronstadt, " Mark DiCamillo, the Field Poll director, said in an exclusive interview with TheYellowDailyNews. "And he's been California's governor twice, the secretary of state, the attorney general, the mayor of Oakland and he's ran for president I forget how many times."

Analysts said the lack of a sexual encounter between Ronstadt and Brown, who goes by the nickname "Jerry," amounted to the biggest political sex scandal since the Monica Lewinsky affair of 1998, when President Bill Clinton was impeached for having sexual relations with the 22-year-old White House intern.

Brown insiders quickly downplayed the developments, saying the 72-year-old candidate has four months until the November election and enough time to have sexual relations with Ronstadt. But Brown's entourage conceded that, in the meantime, they would change their election strategy.

"Now we intend to focus our message that the candidate is riding on the coattails of his dad, Edmund Gerald Brown Sr., who was also governor," a well-placed Brown operative, requesting anonymity because of the sensitivity of the topic, told TheYellowDailyNews. "In addition to Brown living vicariously through his dad, we also intend to stress that he was, and will be, Governor Moonbeam."

To be sure, the news was also a major blow to reporters covering California's race for governor.

"The press has been hypnotized by the Ronstadt angle for so many years, I think it might be difficult for it to focus on Brown's political actions for the last four decades while he was in elected office," Bruce Cain, a University of California at Berkeley political scientist, said in an exclusive interview with TheYellowDailyNews. "I think the media might have a really hard time doing that."