by Peirce Braslalames, TYDN BP Oil Spill Affairs Writer
NEW YORK -- (TYDN) Oil company chief executives are mulling whether they should pollute oceans and coastlines with black goo, as BP did, so they can be fired and automatically reap severance packages worth tens of millions of dollars, TheYellowDailyNews has learned.

Several chief executive officers of oil companies said they were considering becoming responsible for massive oils spills so they can be terminated and promptly collect multi-million-dollar severance packages as did Tony Hawyard, BP's chief executive, according to an investigation by TheYellowDailyNews.

These executives, who spoke to TheYellowDailyNews on condition of anonymity, said they were seriously thinking about following Hayward's path to an immediate lifetime of riches even if it meant mimicking BP and soiling hundreds of thousands of miles of ocean and coastline.

"The only incentive to keep these executives from being derelict in their duties is to ensure that they can reap substantially more millions of dollars than the millions they would be paid if their companies soiled oceans and coastlines," Carl Pope, the Sierra Club chairman, said in an exclusive interview with TheYellowDailyNews. "We applaud the president's swift response to this crisis." 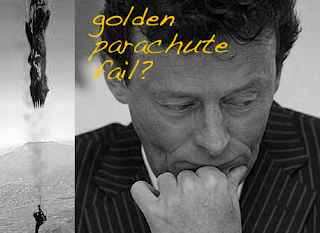 Hayward was ousted Monday and handed an $18 million severance package after BP became responsible for the United States' largest man-made environmental disaster. BP's Deepwater Horizon's Macondo well spewed millions of barrels of oil into the Gulf of Mexico for three months, polluting thousands of miles of ocean and coastline from Texas to Florida before it was temporarily capped last week.

Republicans, however, said the president's response to Hayward's ouster was too little, and too late.

Mitch McConnell, the GOP Senate majority leader from Kentucky, said in an exclusive interview with TheYellowDailyNews that Obama's dealing with the BP spill underscored that the president was a socialist who pretends to be an environmentalist.

"That the Obama administration demanded that BP set up a $20 billion fund to compensate those harmed by the spill," McConnell said, "underscores the president's Marxist ideology and how little he cares about the environment."