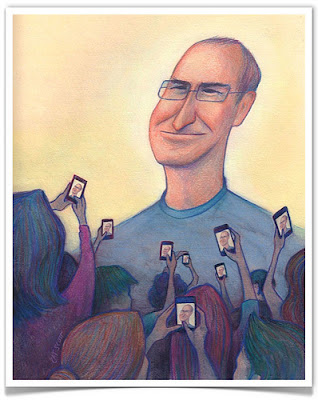 Jobs, addressing reporters here at the technology giant's headquarters, said user error is causing clarity and call-drop problems with the device, with 1.7 units sold since its June 24 debut.

"People just need to learn to use the device in a certain way, to speak slower, clearer and louder," Jobs said to a huge round of applause from hundreds of technology reporters here. "The phone's users are its only design flaw."

"Our hats are off to Mr. Jobs for finally coming clean and admitting what the iPhone4 problem was," Sanford C. Bernstein Co. analyst Toni Sacconaghi said in an exclusive interview with TheYellowDailyNews.

Apple summoned the media here in a hastily called press conference amid reports that the phone's antenna, when gripped on the lower left side, significantly reduced reception, sometimes dropping calls.

For those unable to use the phone "correctly," Jobs said, Apple would provide a 1-inch-long black strip of electrical tape to cover the lower left corner of the device. Jobs said that should increase antenna reception "despite iPhone4 users who cannot correctly operate the device." And he instructed Apple store employees to be "kinder, gentler" when dealing with iPhone4 users "too incompetent to place a phone call."

The blogosphere immediately blasted the electrical tape overture as not going far enough.

Wired's Gadget Lab complained that the tape was only offered in black. TechCrunch noted that it was unfair to charge iPhone users a $9.99 processing fee for the piece of tape.

Gizmodo, in a terse editorial, said it supported the plan but warned Apple that consumers should not have to "wait more than four hours in line to get their electrical tape."